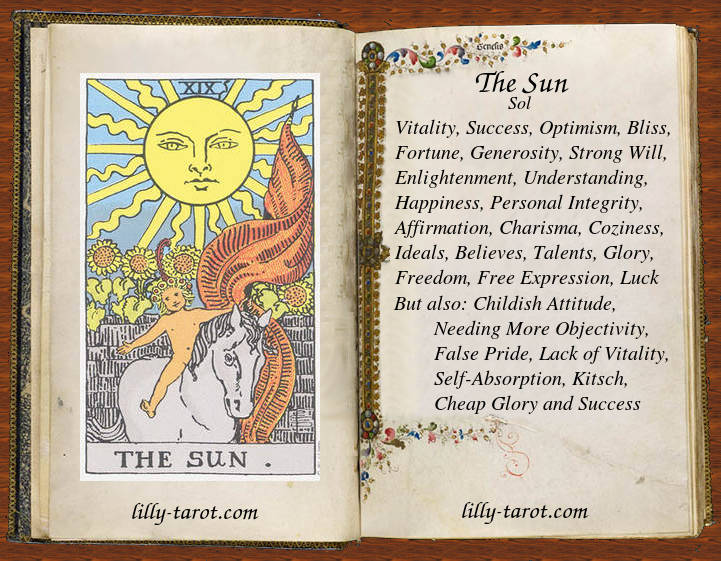 The Sun is 19th Major Arcana, Arcana means secret so it's the group of Major-Higher secrets/keys/principles. It is not called Major because it's hard to be understood but because it refers to mundane rather than personal stuff. And, in the case of the Sun, The Sun is very and primary mundane card. It doesn't refer to title or "vocation" such we had with The Empress, The High Priestess, The Hermit. Not so similar with The Moon too, thus The Moon is both personal/subjective and mundane. Actually the Moon is acting like a filter between mundane and personal. So The Sun might be put in same group with The Star, The World, and maybe Judgment. Thus, The Sun is still one of 22 archetypes, but there is quite difference between archetypes among themselves. The Sun is very collective archetype, yet still personal. Why that, it will be explained.

Even at the first sight, The Sun awakes very positive feelings and impressions. Some of the first associations are warmth, brightness, shining, positive energy, vitality, freedom, clarity of the day light, easiness, visibility, discovering, revealing and so on. Those are that universal and collective associations that the The Sun awakes among the many readers. At least, the Sun as heavenly body is our star, visible to everyone and primary life giver to our earth. It is the heart of our planetary system which unselfishly shines for all of us. The Sun is the giver, never receiver. Its influence is so huge and important and that had been known since the far past of the ancient times. So it's not surprising that The Sun was glorified as divinity. I don't want to go trough the anthropomorphism, thus I can't reject the validity of that concept. I just want to avoid commonplaces and trivialities which are made by constant and uncareful use which makes it worn out.

What is the personal about the Archetype of The Sun is that all of us have its spark incorporated into ourselves. That spark is our inner Sun - our inner life giver and urging force. Without its heat that drives inner alchemy we would be amorphous. That's primary life force which makes us alive in all meanings of that word. It make us alive physically by giving energy to matter and makes it circulate. The Sun makes us alive as spiritual beings because the same energy drives our consciousness and leads us to experience the world beyond tridimensional reality. That's our driving force to express ourselves more than just bodily, but as a wholeness. That inner shining bright star, is not just our life giver, that's our purpose giver, which, in final line, is more important. We are all looking for the personal purpose, and it's already laying inside. I believe that most of you have already met with such concept, especially in large body of occult and spiritual literature and practices as well, but maybe titled by various terms such Crowley's hadit and his quote "Every man and woman is a star", Castaneda's "Fire from within" or at other places terms such as inner fire, inner flame, conscious, providence, enlightenment, clarity and so on. All those terms aren't synonyms in any particular case and particularly may have different meanings, but among others very often share that the same detail and point of inner urge which fulfill one's life with purpose and makes it worth.

The Solar principle is representation of The Sun. It is male, Yang, the active principle of the universe, described as male and creative and associated with heaven, heat, and light. Other associations are creation, activity, visibility, brightness, power, urge, will, strength, electricity, radiance, shining, impact. While Yin or female principle possess magnetic features which attract, "pull in", absorb and so. And this is how they complement each other and make dynamic balance which is source of cyclic nature and life at all. If there have been just one principle presented there wouldn't be giving and receiving and thus no life or movement. If there wasn't female principle the Solar one wouldn't have an object to radiate his energy on, there wouldn't be something to keep it in balance and creation would turn into distraction. Extreme form of any of principles turns into it opposite. So the nature sorted it out in the way of fused to be divided and divided to be merge again. It's again as alchemical reference such for the Major Arcana Temperance: solve et coagula - dissolve and coagulate. It could be observed in many ways because it is the nature of whole visible universe, and one of observations would be that that it breaths the spirit into matter and makes her alive and on the other side the matter gives a form for many of spirit's expressions. Electricity gives an impulse to the form and the form compresses the force and gives it potential energy to express in numberless forms. Nothing here is so abstract, the nature was taking care to give those principles visible and physical form trough the real existence of The Sun and The Moon as heavenly bodies to make it humans notions closer to understand, experience and see.

All of those positive features of The Sun and Solar principle at all, are positive in the meaning of affect, activity, not only positive in the common use of being positive. Nothing is completely "positive" in that way. Too much activity could be destructive due spending resources. Too much giving without receiving goes in vain. To much shining and light might make the most beautiful thing invisible and to much heat may dry and finally burn the most beautiful flower. For example let's think about the heavenly body the Sun in the time of sunrise, zenith and sunset. If it's too hot the Sun is far more pleasant during the morning and evening than in the noon. It is energizing while it smoothly touches your skin but exhausting it you catch the sunstroke. Too much electricity makes disbalance withing your personal balance between electric - Yin and magnetic - Yang currents in your body and mind, tough it do some kind of energizing.

The Sun represents almost everything opposite than The Moon does. It reveals secrets and enemies, brings clarity into confusion, defines thoughts, dispels doubts, fears and depression. The Sun shines the light toward The Moon, so as The Sun represents conscious and The Moon unconscious, by the light of the Sun rays unconscious is getting accessible to be understood and its potentials could be used properly and with full awareness. As it was said that the Moon as the female principle is also presents among men, the same is valid for The Sun, as male aspect, that is presents among women. Even more, women may get more powerful if they incorporate and connect more with Solar aspect. If you are a woman and fear of losing your femininity by connecting with your Solar aspect be energizing that you are wrong. The practice has shown that women are getting more irresistible when they make balance between Solar and Lunar aspect, because accepting your natural opposite is leading you to express easier and powerful your inner Lunar potential. Other "side effects" of it are better understanding the male principle at all, which may lead to lesser confusion about relationship and choosing the right partner. Once you understand the male principle you could become such Solar Priestess, you will know exactly what you want and expect from the men and your wants and expectations will express in more healthy and natural way. You will not fall anymore into situations of making compromises and allow what you don't want because of a very few good features, nor making compensations accepting something which doesn't fit you well and fulfill you. It means you will acknowledge your Animus. There will be more words about this subject in the theme of The Emperor and others male archetypes thus some of them aren't exactly Solar such The Sun and maybe The Emperor. Beside the common, general and popular division to just two of the them the Solar and Lunar, things are not so simple but still not completely wrong. I just want to avoid generalization because it is to blame for so much confusion in our world today. The same thing I wrote about the women and incorporating the male/solar principle, the same is equally valid for the men and their incorporation of the female principles such The Moon, The Empress and The High Priestess.

Major Arcana The Sun is obviously related to the Sun, the heavenly body and Sephira Tiphareth. Other associations are Leo as embodiment of ego, strength and his lust for ruling, the Eagle is also very solar in nature(but not only solar) and the Pegasus which represents the freedom of ego, which is lower emanation of solar principle based in physical realm.

If you get The Sun as the card of the day, think over what was mentioned in previous paragraphs. Beside that it suggests you that you are healthy, energetic and intensive but not uptight. It is a good time to re-examine your conscious mind because many things may become clearer. The Sun brings youthful and bright energy so enjoy this day. It may signals you that you need to work on your solar principle. Beside that, The Sun is very positive card and promises success in any field. Your creativity, expression, activity, giving and charisma may rise more than average. Also, the things that used to be a problem could be done easily these days and settle at the right place in the right time.

If you are interested to strengthen your Solar powers, energy or electrical energy into your body and mind, you may use the card of The Sun for meditating.

Wish you good night and shine your light bright!