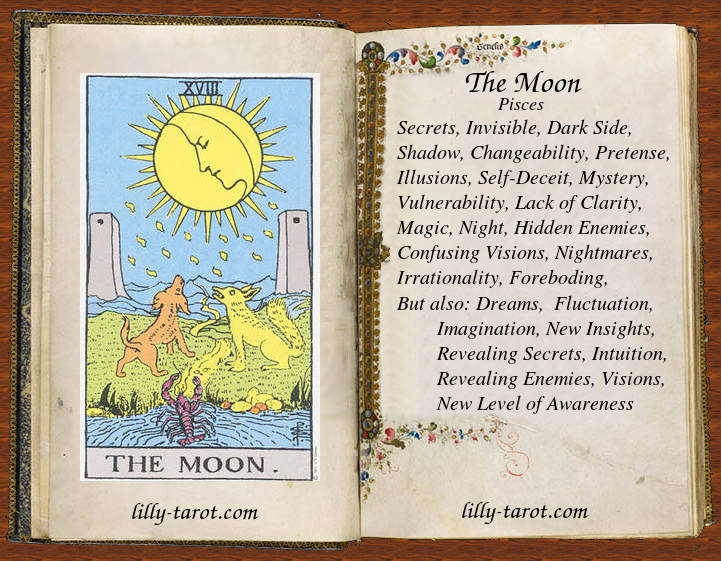 The Moon is 18th Major Arcana in tarot deck and as Major it represents the certain archetype. The archetype of mythological and astrological Moon is complex and is divided between Major Arcanas The High Priestess, The Empress and The Moon. Specifically The Moon, represents it's dark, misty and hazy side. Not only declining, waning Moon phase, when she reflects less light and is going to become dark but also the literally dark side of the Moon. The other side which she never turns to us and we can not perceive by our eyes, which is the secret trough the Ages and Aeons. Isn't is amazing how the universe plays it's game in a perfect and intelligent order which is still unknown to human race beside all modern technology and progress? It always has another ace up his sleeve. Peel off the surface layer is just face to the next. What a trick!

Here we deal mostly with subconsciousness on a personal level and primordial concepts of collective unconsciousness on collective level. All unknown, hidden and mysterious is buried here. This is such a tomb of ancient hidden treasure, but yet a womb of numberless embryos which are waiting to see the light of the day. It is such a deepest depth of the ocean yet the highest heavenly part of human nature. Acknowledging this means acknowledging what the actually soul is and what is our real nature as human beings.

At this point, I have to turn back to my notes about the Major The Star and its relation to Neptune. While The Star represents the, let's say, "light" aspect of Neptune, The Moon is related to Neptune's other face. The formless face of the Cosmic See's monster, which is beautiful for those who "see" and ugly for those who ignore. This is a reference for a personal shadow. As the Moon, as dark body, reflects the light of the Sun, the same principle applies to our shadow. The shadow, as our "lost in the dark" unconscious part, reflects our visible and radiant, conscious part. The more the consciousness is developed and bright, the more "light" it shines onto unconsciousness. The images which seem to be horrible in the shadow of the night might become gorgeous in the light of the day. (At the account of this, I would like to say a few words about Medusa the Gorgon, the one very significant archetype figure along with the star Algol and principle of Lilith. But it will be left for another post, all of them deserve a special place and attention.)

Personally, I disagree with popular concepts today that soul represent only the lightest and most sublime parts of our beings. We just rather accept those concepts because somehow they are constructed to be more easily understood - the simple principle is all love and light is somewhere high and all dark, shady and dimly is somewhere down. This concept is applicable just in a matter of conscious and unconscious, where the light is that what is visible, accepted and confirmed - conscious and dark and shady is all invisible, unknown and not accepted.

I have a lot of words to say about The Moon, but an article such Card of the day isn't appropriate for long story. Soon I will be posting more material about Major Arcana The Moon and here I'll try to stick to the basic and general description of The Moon as a daily card.

Traditionally, Arcana The Moon is associated to the sign of Pisces. Pisces are the last sign in zodiac and hypothesized to include all previous zodiac signs, so the Pisces appear to be the last, which include huge zodiac symbolism, and the ones which preceded the first. Symbolically, the Zodiac arises from the Piscean see. I would add here the relation with twelfth house, planet Neptune and Moon. All of them deal with secrets, unconsciousness, illusions, visions, hidden things, dreams, volatility, inconstancy, changeability, fluctuations, irrationality, imagination, female nature and female principle. But they also have a lot with submission, deception, enemies (especially the unknown ones), uncertain situations and events, fears from unknown, vulnerability, hard exposure trough pain, psychical issues, negative emotions and so on. Due to non-acceptance of reality, to protect oneself from the cruelty of the world around, tendency for escaping into the imaginary world is very presented. Under this influences, here we can also find the great artists and and artworks in the sphere of painting, lyrics, music and photography. Inspiration needed for such remarkable artworks is derived from already mentioned dreams, imagination, deepest depths of the soul and rich inner world overflowing with emotions.

As personality, people under influence of The Moon are dreamers, They are fragile and sensitive. Their sensitivity goes far to the level that they can sense various influences and energies from their closer and farther surroundings, seems like they have antennas for energy detection. Very often they are not quite sure where their feelings and misgiving are coming from, are they their own or they just picked them from the environment or someone else. Their intuition and sense for compassion are not to be underestimated. On the other hand they could be masters of confusion, primary because they are subjected to self-delusion and really tend to believe to their fixations. They involve too much personally and emotionally into the things and influences around them which pretty much direct their relation toward what is real and what is not. Once they learn not to get too personally their intuitions may reach mastery which many would be envious of. If they are not trapped in their lies they are real lie detectors.

The Moon as a card of the day may suggest that you are in dreamy state today. Due to that you may become subjected to the lies and deceptions. Someone might hide something from you and keep you in illusion. It would be good to pay attention who might be envious of you, who lies you or keeps some important information far from your sight.

This is also a good period to get in touch with fragile and vulnerable part of yourself. Facing the fears and all what you don't want to see and know sometimes need to be done. If you find out that recent period was hard in some way you should think over which inner inhibition or self-delusion keeps you away from wanted state.

Vivid and unusual dreams might be present along with others extraordinary psychic sensations such feeling other's presence, unusual physical sensations, lucid visions and scenes while you awake, astral experience, lucid dreaming and so on. The Moon may signal increasing psychic sensation and new revealed stratum of consciousness which may lead to different insights than usual. It would be good to take a note about your experiences during this period and bring some conclusions about them. Even if nothing spectacularly happen during this period, it's just seems like that on a surface. Remember, The Moon is a master of hiding and secrets. If you take a note of you experiences, even if they seem to inconsiderable, after that period you'll be able to recall it and examine it. Things will get clearer.

Especially if you pull out The Moon reversed, you can count on many things that will come up on surface and you'll be able to parse the real and unreal. Having The Moon down, such at The High Priestess image, at your feet, means you have the influence of The Moon under control. But don't forget, the Moon never shows her whole face and peeling off one mask is just facing the another one.

Today, as a card of the day, I pulled out The Moon upside down so it was a hint for me to try to demystify The Moon influence and not to give on to temptation to fall under her influence, though it is seducing. The Moon reversed should lead me to tell the truth and reveal the secrets. But whose secrets, her, mine or yours? We are all not sure, at least not yet. I have a feeling I told the truth, but did I? Or was I just taken and inspired by misleading The Moon's influence and told a lies in her name? The time will show. The Moon is changing, the truth is changing, everything is changing. What was the lie yesterday may become the truth today and tomorrow may turn into illusion. That is what The Moon is.