I like big and wide tarot spreads! I really like them. They give me an opportunity to read every card regarding its place in the spread knowing what every position means. But not only that. I can read them criss-cross, compare the cards on one side with the cards on another side, or compare the group of cards above with those bellows. I can search for the repetitive numbers, analyze proportion between each suit and majors, see what is compatible with wich, etc. There are many ways of reading cards in large spreads. It makes you both - to think analytically and to respond to your intuition, to read cards individually by their position and to gain overall insight.

It is funny, it is interesting, it is challenging. But, I have to admit that sometimes less is more, even if I am not such big fan of minimalism. The truth is that sometimes a few cards are fair enough in the spread, especially for brief and concise questions. The main advantage from that is - you get the straightforward message. Concentrated, concise and short. Tarot cards are already rich in meanings so you still have the material for reading and to contemplate on.

In my longtime friendship with the Tarot, I realized that some cards have a specific design which could be used as a template for a spread. One of those cards is The Lovers. The image and description of The Lovers card make it quite cozy to design a short and quick tarot spread. This will be your snapshot for a quick review of how you and your love interest are getting along.

Here I will not get into an interpretation of The Lovers tarot card meaning. Instead, this will be a quick guide. I mostly work with Rider-Waite deck, but there are a few more decks that I work with or used to work with. All of them - Waite-Smith, Steampunk, Thoth and Favole deck - have one man and one woman on the image, and except Favole deck, they have also one angelic-like figure. On the Waite-Smith deck, we can also see a snake there (around the tree next to the female figure). The base for my 'The Lovers' spread is the same name card from the Rider-Waite deck.

Take your deck and get ready!

The Lovers spread in depth

Select The Lovers card from your deck and place it on the table. Shuffle the cards as you usually do while concentrating on The Lovers card. This is your focus card which already represents you and your love interest because it is preselected to means that. That is the purpose of the preselected card anyway in any spread and with any card you choose to represent something specified. In this specific case, The Lovers card already has all the elements we need for this spread incorporated into the image. This makes the whole process more elegant and easier because you don't have to think about each position, you just have to 'dive into' The Lovers card.

Note: If you are a man, the card number 1 refers to you and you place it on the male's side of The Lovers card.

If you are a woman, the card next to the woman on the image describes you. What influences you, how do you feel, what do you bring into your relationship, how does this relationship makes you feel etc. It can be your overall attitude or the particular thing such your feelings, your energy, how do you affect the relationship or whatever you want depending on what kind the insight you want to get.

The male side, in this case, will give you an insight into your love interest. His attitude toward you and your relation, his feelings, what kind of energy he gives into that relationship, is he interested, what influences him or if he is already taken (if there is female court card next to him it may be a woman who already exists in his life). Be creative with the reading and choose will you focus on something in particular or on general trends.

The important thing here is to equally read and give equal attention to the cards on each side. For instance, if you read the card next to you as a general trend, do the same with male's side card. If you read your card just as feelings, do exactly the same for the other one. If you chose to read them as an influence read them in the manner what influences you and your love interest. Or if you want to get insight into what you and he give and put in into your relationship read both (or how many cards are there) in that the same manner. Only then you will get a clear picture.

The Third Card, The Snake

The third card (the one below) is the Snake. The snake is the temptation. It represents the threats to your relationship. It is not always the third party. It can be anything that potentially may hurt your relationship if you give in into temptation to act in the manner of that card. Have in mind that this influence is still under your control, as well as the card which is at your side in the spread. You have the power to resist its negative influence. It is just a warning.

Note No.1: Having a positive card in negative position (temptation/threats/warning in this case) might be confusing. But consider the fact that sometimes some light and positive things may also cause harm. It is similar to having a good friend with whom you have a really good time, but you when together you two do negative things. The same is with if you have a positive card here. You may be doing things that please you but hurt someone else. For instance - Three of Cups. Maybe you are partying a lot which causes harm to your relationship and makes the other person feels suspicious. Or, maybe some of your friends are the minor threats if they are dragging you off, so they get more of your attention at the expense of your love interest or partner.

Note No.2: Court card at this position may refer to the third person. Due the fact that court cards usually represent real people or the role we take, it strongly suggests that particular person is a threat, not event, not circumstances. It may be someone who simply interferes your relationship and affect you or your love interest. Or it may be a real third party, whether are you or your partner interested in that person, depending on it is it male or female card. You should also consider an option that the court card here may represent the role or an attitude you or your love interest take, that annoys the other one. If you clearly can recognize that behavior of one of you fits this card, then it is probably an attitude or role one of you takes which harms your relationship.

The fourth card (the one from the above) represents positive influences and heavenly forces. This is like a blessing from the above. This card represents an Angel from the image which tends to unite and bless the union of male and female on the image. If there is a positive card at this place, consider it that your love is approved from the higher instances and that you are blessed. It is enhanced even more with the Major Arcana at this place. If there is a negative card, that influence is still something which unites you and your love interest, though it may certainly be much less pleasant. It may simply be some problem which made you to meet each other to work it through together. So, with negative cards, there is some obstacle that unites you and that obstacle is there for the reason. Apart from positive/negative/neutral cards, the Angel(or the Higher force) card is the influence over which you and your loved one have less or no influence comparing to the Snake card over which you have an influence if you choose to.

Note: Depending on the card that shows up here, this position may also tell you if your relationship is karmic, are you soulmates or twin-flames who were meant to meet each other in this lifetime. For instance, The Judgement may suggest that it was meant to be. The Justice may speak about karma, Temperance about soulmates, and so on.

There are decks where The Lovers card has three human being instead of two. The angelic figure is usually present in one or another form. You can see Cupid in some decks. In such decks, there are usually two female persons and one man between them - Kazanlar Tarot. It looks like that he has to choose one of two women. I saw The Lovers card with two male persons and one female person only in two decks - The Ancient Tarot of Lombardy and Maco Polo deck. If you have one of these decks, then you would probably want to customize this Tarot spread regarding your deck. The third person may take the role of the Snake from my model of The Lovers in Depth. Or, you can pick two cards for the male's side of the spread to check his affinities for you and for the third person. Make sure to determine in advance which position refers to you and which to third party. 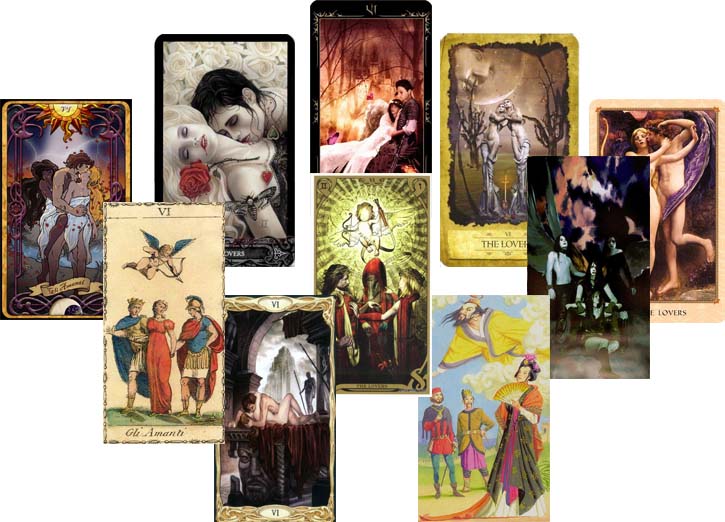 There are also very beautiful decks with fewer details. One of them is Steampunk deck. There isn't a snake which makes Steampunk Lovers more innocent and filled with serenity. In Favole and Dark Fairytale deck, there is no snake nor angel-like figure, just two persons embraced. It gives very romantic look to both of them.