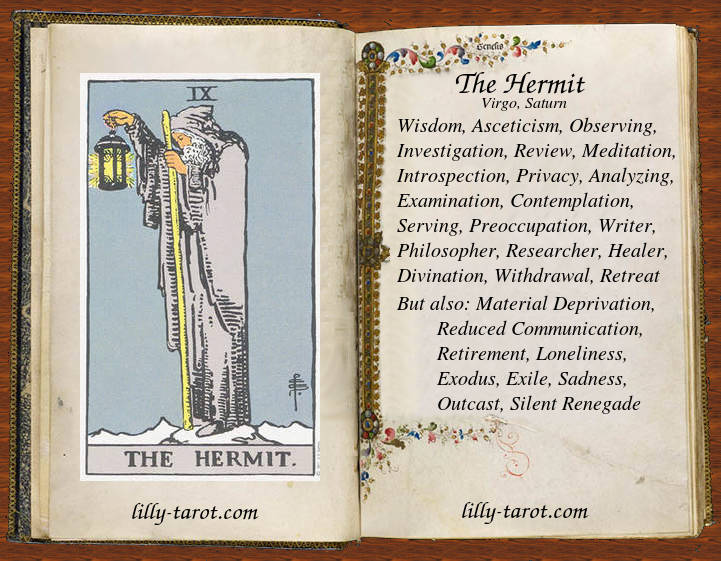 Major Arcana The Hermit is one of those whose name refer to the person of certain qualities, features, title or even vocation. I am not sure are vocations such The High Priestess, The Hierophant or The Hermit still appropriate nowadays, but they surely were in the past, in the ages when Tarot originated. The Empress and The Emperor also were titles and vocation in the same time, together with The Hierophant and The High Priestess. All of them incorporate certain features which go beyond the titles.

The Hermit, concretely, include features such the sage, the wise man, ascetic, the enlightened one, the one who left comfort of society in order to find the higher truth trough contemplation and meditation. The Medicine men (healers and spiritualists, among North American Indians, a persons who possess powers of healing and of seeing, somewhere called shamans) and sorcerer who use to live far from society, unavailable for masses, hence their rituals and knowledge don't have just ceremonial purposes, also fit the image of The Hermit. They are appreciated, glorified and often seen as outcasts from the society in the same time. Wide range of mystics and truth seekers who left earthly pleasures and choose ascetic life are Hermits of their kind.

Toward this you may notice that The Hermit, The Hanged Man, The Mage and The Hieorophant have some features in common. The difference between The Hanged Man and The Hermit is that The hanged man type is more mystical and ecstasy oriented while type of Hermit is rather philosophically oriented. In comparison with The Mage and The Hierophant, The hermit doesn't seek and doesn't need attention nor ceremonies. He doesn't deal with morality and the terms of "good" and "evil" as The Hieorophant does. As his knowledge is based on life experience and transcending the same, he knows that the truth is beyond the notions of good and evil. He doesn't affect the nature and reality as The Mage does, he rather observes and seeks for the clues.

The Hermit is the one of the male archetypes figure, among The Mage, the Emperor, The Hierophant and The Hanged man. He is the one step on the stair in male principle's maturation. He passed the phase of desire to effect others and control the reality in the Mage's way, the phase of desire to rule and manage of the Emperor, the phase of ceremonial proclamation of truth and moral code as the voice of the higher realms who translate the will of the God to the mortal man as The Hierophant does. He accepted relativity of time, truth, moral, might and power, humans life and influences at all. The Hermit accepted his mortal nature and that he is just one minor part in endless life cycle. He passed beyond the illusion of self-importance, the ego and worldly stuff deciding to leave behind all that connects him with mentioned attributions. He serves his role in the way he has chosen to walk alone his own way, far from the all shiny things and affairs of common social life, though he doesn't fight or deny them, he is just walking by observed state of things. Such an accidental beholder he doesn't show love or hate, affinity nor disgust toward anything. His indifference is acquired trough contemplation, meditation and transcending. And that indifference and no willful intent to involve make him look so distant, estranged, transcendent, even cold-blooded, yet analytical, wise and thoughtful. That is what separates him from The Hanged Man, who is transcendent in his ecstasy and devotion to more spiritual and less mental state of spirit, along with his willing for self-sacrifice.

The Hermit is usually related to the sign of Virgo, and sometimes with planet Saturn. Modesty, analyticity and forethought are some of Virgo features. They are also known to be cautious, science minded and recluse. Reason to connect Saturn with The Hermit could be that he is depicted as an old, wise sage with gray gown on, in the mountain, which are all in Saturn's manner, with only two things carrying with him - the lantern and stick. Saturn is about limitations, material poverty, loneliness, isolation, old age and wisdom earned from long life experience, temptations and difficulties. So, I stick to both correspondences - Virgo and Saturn, as Hermit represents some features of them both. Even the light in his lantern is limited and looks like it shines from the cage but still shines the some light to illuminate the way trough the deepest and thick dark of night. Virgo is opposite to Pisces which is related to The Moon, and Saturn is opposite to both astrological lights Sun and Moon. In the text about The Moon I was talking about it trough the light of dark aspect of astrological Moon. As opposites, they are quite different in their own nature but still have something in common. Everything has a piece of its opposite incorporated inside of it, such yin and yang. Thus, The Hermit and The Moon both are dealing with the darkness but in different way. Both could be connected to the "dark night of soul" term. The Moon as heavenly body possesses its dark side metaphorically and literally. Saturn observed trough the astrology lens is a distant, cold and dark, at the edge of naked eye visible piece of space. It stands between the worlds of visible and invisible, such the guardian at the entrance. Only those gifted by Saturn's gift may enter trough this door which separate visible and invisible, known and unknown, world of light and world of darkness. Transcending Saturn's limitations trough the way of passing Saturn's tests and challenges, the one, similar as The Hermit, is ready to acknowledge that the real truth lays beyond good and evil, darkness and the light, and has a little in common with usual notion of what is the truth. Acknowledging that, brings the real feeling of alienation of daily affairs, common way of thinking and reduces social life. One stops being interested in small talk which leads nowhere and which purpose is just to kill time. Usual entertainment is becoming boring and pointless along with common humans fears, doubts and wishes.

While The Moon could be described as endless ocean of unconsciousness and synthesis of numberless impressions and feelings, The Hermit is the one who is ready to deal with it. He represents that part of our beings which strives to conduct an investigation of unknown and lighten the secrets, by using his analytical abilities and impartiality. Reaching that level of impartiality implies a long practices of self-control, self-observing, meditation, contemplation and real commitment on the path of knowledge. The true impartiality and clear reason is possible if the one if free from bondage of lust, passions, emotions, care for material existence, in few words from the slavery to own weaknesses which are principally children of ego. So The Hermit is depicted as an old man accordingly to that the old age is considered to be last phase in human life when individual is not quite interested in earthly pleasures anymore, when physical strength decreases and the ego loses his stronghold in them. Gray gown represents material poverty and loss of interest for external appearance but, instead of that, paying attention to inner qualities and silent unobtrusive wisdom.

It is said that the light in The Hermit's lantern is The Star, 17th Major Arcana, which may mean that The Hermit is carrying with him some of The Star's attributions. Holding The Star as his guiding light, he makes something that is distant and heavenly close and controllable. These are just possible interpretations of this presupposition.

Pulled out as the card of the day, The Hermit may refers to solitude, isolation from daily life and spotlights, even to resignation. He leads you to meditate over yourself and self-observation with full attention focused on your reasons. Impartiality and objectivity are required to get into your deepest personal secrets and hidden mottos. Be honest to yourself, it will be paid off. Once you really acknowledge who you are, what is your true nature and driving motives and being unmercifully honest to yourself about them, you will learn and get a lot. It doesn't promise you joy or some lifted experience but it promises the truth. Disclosure of you personal secrets may make you wiser than before and more cautious toward other's motives and their real intentions as well.

In the time when you need guides, analytical perception of certain things, wise advice or just clear voice of reason you may meditate on the card The Hermit to hear his advise. Of course, as it is already a part of your being, you already know what is the right for you though you may not be aware of it. By putting attention to some outer object, in this case the card The Hermit, you externalize this archetype which may make it easier to observe and understand it. The hint you are getting actually is coming from within you. Meditation on this card may you make more connected to The Hermit part of yourself.