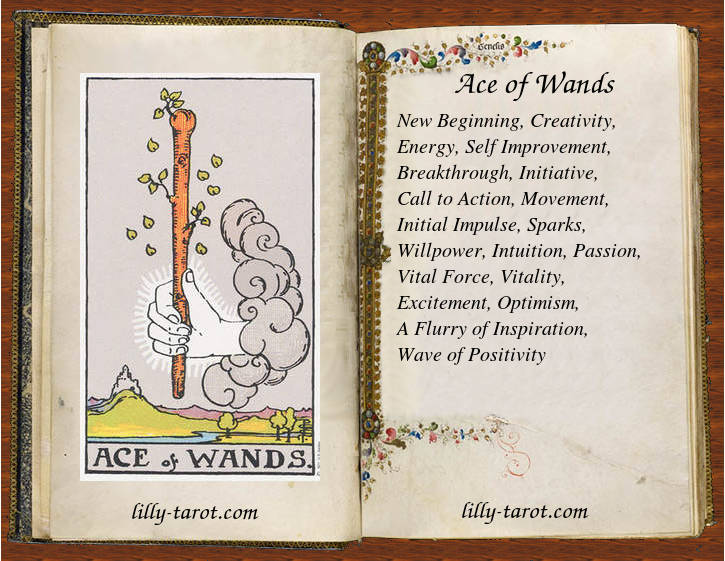 Ace of Wands represent source and root of Fire element. Due to that it holds all attributions related to element of fire in the purest, unmodified from as it is the case with cards numbered two to tens. It represent whole element and its primal essence. The rest of pip cards are modification of this pure form and its various expressions are based on qualities of specific zodiac signs and decans they are divided on.

All of the four Aces share the same feature, they are bearers of the essences of suits they are belong to. Farther, all four Aces share the feature of predominantly positive meanings both in divination and other works with Tarot. However, it doesn't hurt to be careful while reading spread with more cards. If surrounding cards are predominantly negative it will surely effect the positive influence of an Ace.

Ace of Wands, similar as Ace of Swords, represent active, male, piercing energy. Of course, they are carrying different attributes. Ace of Wands is force which leads to movement. It is initial spark of action of various kinds. It is lifting, optimistic, energetic and passionate. Though, it is still just first impulse. If not supported by other active or at least light cards, it may stay just that - initial impulse and nice wish. One of the Ace of Wands flaws, maybe the biggest one, is lack perseverance, thoroughness, plan and stability. It acts fast, momentarily, in one breath, in the manner "now or never". When excitement starts dwindling the focus starts vanishing.

In readings, Ace of Wands is excellent at the very beginning of something. As it holds the great potential for anything you may wish, it promises you high energy and good start. It is like a fair wind on your back. If your question is related to something you already started in the past, no matter is it new project, job, relationship or anything else, you may expect fresh energy entering that field of your life. Old stuff is getting new life and that initial spark from the very first time will shine again.