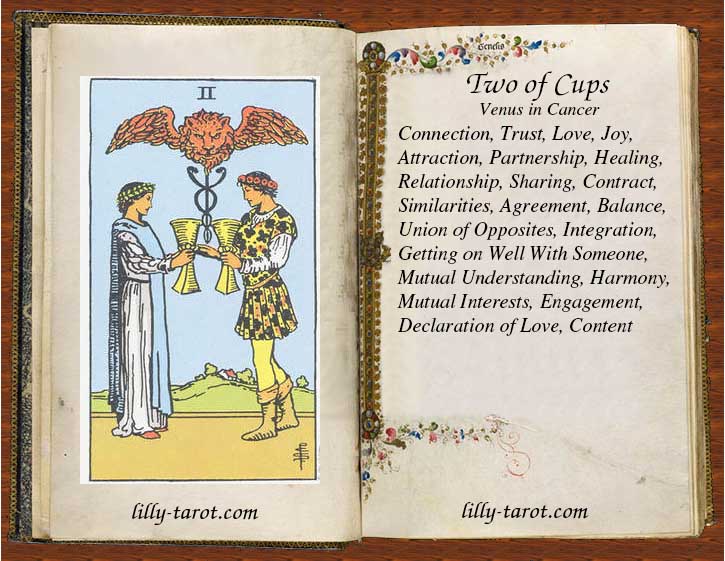 If you compare the images of all four Twos from White-Smith deck, you will notice that Two of Cups is the only Two that actually has two persons on the image. As the card of love and relationships, Two of Cups is very welcome if comes out in the questions regarding love and romantic relationships. But it doesn't mean that this card refers only to love and romantic relationships. It is also very favorable when question is about work or health or some other theme. This is one of those feel-good and "happy" cards. It is interesting that Two of Cups is the only card in the deck which has Caducei symbol on it. Symbol of Caducei connects this card with the peace and neutrality matters. It is the symbol of Greek god Mercury who governs communication, skills, trading, agreements, arrangements, contracts etc. It represents an agreement between the opposite entities which brings peace and harmony. The esoteric meaning of Caducei is related to alchemy, balance, growth, Kundalini energy and transformation through the unification. One of the interpretations of this symbol is that snakes represent left and right nadis - Ida and Pingala, and that staff in the middle represent Sushumna - central Nadi in the subtle body. The more esoteric symbol here than Caducei is certainly red lion head above the Caducei. Some thoughts about what Red Lion represents:

The Red Lion is mentioned as an alchemical symbol and alternative name for the Philosopher’s Stone, as Kundalini, as energy united with the will and other similar references which all refer to purification, refining, spiritual ascending and growth.

Two of Cups tells us of the balance, mutual respect and appreciation between you and the other person, whether it is your romantic partner, business partner, friend, relative or any other person with whom you can develop complete understanding, find out mutual interests and strive to the same goal. You and the other one are equal in this relationship. Instead of "you and me" this relationship outgrows in "we". However, the same could be told about personal level as well. Finding inner balance and appreciation within yourself, loving and accepting yourself for that what you are, uniting opposites within yourself is also under the influence of this card. And, you can really appreciate others and be appreciated when you develop this feeling inside of you.

Two of Cups corresponds with the first decan of zodiac sign Cancer. Ruler of this decan is planet Venus, the planet of love, affection and partnership. Cancer is a romantic and emotional sign ruled by Moon. Altogether they suggest about emotional attachment, emotional security and confidence. Love and be loved, nothing less and nothing more. Taking care of each other and being together is all that matters.

Major Arcana The Lovers looks kind of similar to Two of Cups, especially because in some decks Two of Cups has title "love". There is no doubt that both cards have to do with love, partnership and romantic relationships, but there are also some big differences. The Lovers, as major Arcana are more mundane, While Two of Cups is rather personal card, related to very personal affairs. The Lovers often represents a choice between two potential partners, while Two of Cups suggests that the choice is already made. Two of Cups often suggests that two of people are already in a relationship or that they will be, while The Lovers has wider meaning when the question is about relationships. The Lovers are sometimes quite abstract yet physical, there could be a strong attraction but without real bonds, formal relationship or commitment. If you are looking more for emotional attachment, then Two of Cups is your card. If you are looking for attraction, passion and excitement then it's The Lovers card. Very often, Two of Cups will announce an offer of true emotional commitment and declaration of love which easily may lead to a formal relationship. Have in mind that Two of Cups is also a card of proposal and marriage.

The Justice and Two of Cups, or The Hierophant and Two of Cups may literally mean an act of marriage, loving union between two people crowned by the formal ceremonial act. Combinations of Two of Cups and Three of Cups, or Four of Wands and Two of Cups, points to a proposal and less formal ceremony such as social gatherings and celebrations. If Justice and Hierophant with two of Cups would be an act of marriage, Three of Cups would represent wedding celebration. Contrary to that, The Lovers has nothing or little with anything formal, it is not a proposal, not a marriage. Moreover, The Lovers card often represents a relationship between two people, where one or both of them are already in formal relationships. The Lovers often indicates love affairs outside of already existing love relationships. There is always something tempting about The Lovers card which is not the case with Two of Cups. The Lovers card always carries a certain dose of temptation, and temptation comes out from forbidden or unknown. Yet, there is still a choice. More about it you will find in The Lovers article.