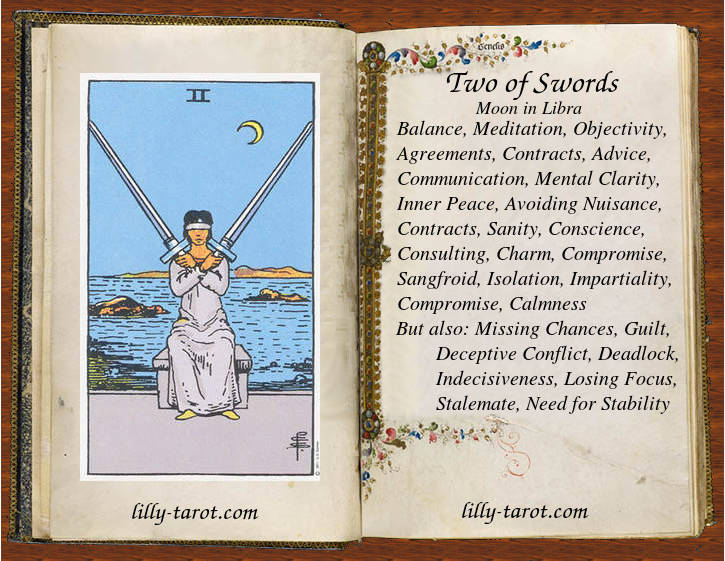 Two of swords is usually related to peace. On the image in Waite-Smith deck (Rider-Waite) there is woman pictured with swords crossed in each of her hands and with blindfold over her eyes. She is sitting and looks calm. The image gives the impression that she is in deep meditation. Behind her back is water, probably sea, and above her left side is the waxing moon. Two of Swords is very lunar card, not only because it is related with first decan of Libra ruled by the Moon. Number Two is also known as lunar and is related to division, fluctuations and water element. Having that in mind Twos are related to emotions, moods, changeability and volatility.

But, is it everything as it seems at the first sight on the image of Two of Swords? The image really gives an impression of peace and calmness. Woman on the image is static and passive. But being static and passive doesn't mean peace. It may look like that, but usually behind the outer passivity is hidden inner storm. Having that on mind it's about the Two, we may speak about inner division and our peace or passivity and not about inner peace. Swords are generally related to mental plane. Here we have two swords pointed to opposite directions which may represent opposite thoughts or opposite feelings. Or even opposition and division between thoughts and emotions. Deeper look into the image reveals that her left arm holds the sword pointed to the right and right arm hold the sword pointed to the left at head height. It gives an impression of discord between left and right brain hemisphere. It is known that left brain hemisphere rules the right part of the body (and thus right arm). It is also known as "male" part of the brain responsible for logical and analytical thinking. While right brain hemisphere rules left side of the body, is responsible for synthetical and intuitive thinking, known as "female" part of the brain. So there is a strong indication that Two of Swords actually shows discord between logic and intuition, rationality and pragmatism at the one side and emotional urges on the other side, and finally discord between mind and heart. This is only one association which Two of Swords awakes.

Woman's arms are crossed over her chest and right in front heart chakra. It gives an impression that she wants to shut down the voice of her heart and to deafen and suppress the feelings as to be able to apply the logic and reason. Acting that way she might tend to be impartial and neutral in her judgement and estimate. On the other hand, she might want to protect herself from emotional hurt by closing her heart chakra.

Blindfold tells about that she is focused on inner process and not on what is going on outside and around her. Some goddesses of justice were depicted with blindfold as a sign of impartiality. In was shown that way that everyone is equal when it comes to the justice, no matter if he is rich or poor, high, middle or low class, no matter of his social status and so. The justice is blind for everything that may turn her from the right course of equitable judgment. Blindfold over the woman's eyes may also refer that she doesn't want to face the truth. That she closes her eyes for what she doesn't like and want to see and accept. Maybe in front of bitter truth which may wound her heart, so she "protect" her heart having a guard and close her eyes in order not even see it.

As one of the Twos, this card is dual in its meanings. It may tell us a story of vulnerability and effort to keep an inner peace by any means, or straightforward story about inner peace and Zen stage of consciousness when it knows that the whole world contains inside of her. That way, for all she wants to know and answers to get, she just need to look inside herself, much like The High Priestess, and not outside. Any dilemma or discord could be overcome if she isolates herself from outer influences and gets in contact with inner self.

Young Moon refers to vulnerability, as anything young and weak. As the Moon is growing the tension in the air is growing too, till it meets escalation during the full Moon. Again, Two of Swords refers to keeping or restoring disrupted peace while the tension is growing. This is the Moon which absorbed just a little of Sun's light, it's still weak at this point but yet potent. There is still much darkness in this Moon which waits to be illumined.

This is the card of passive defense, inner turmoil and turbulence and outer artificial calmness. Two of Swords very well describes situation of being in stalemate. It's not literally lost but there is no chance to win or make a move which may lead to definitive outcome. The subject of question is in dependent state here and nothing really matters to him. He is in the state when he can only passively react till general state change, which is usually in the hands of someone else. So this is surely not the worst card but certainly not the positive one. Nothing really happens, but actually that is the problem - because nothing really happens. And being in stalemate position or constantly in check really puts on test someone's nerves and endurance. That's the reason why I don't see too much of real peace in Two of Swords.

As it's already said that Twos are generally dual in meanings, and mostly their meaning depends on other cards surrounding them in spread. Of course, any of cards in spread is in codependency with other cards and they mold it and effect its expression, but with Twos that is more obvious. If Two of Swords is surrounded by positive cards it really refers to calmness, reason and logic. If the cards are active and mostly positive it refers to inner peace while outer activity and capability to reach meditative state of mind and clear thoughts. If cards are passive and positive more likely is Zen phase and gift of peace. But with negative, aggressive and offensive cards it's more likely to be passive defense, check or stalemate state. Two of Swords, itself, refers, also, to indecisiveness, just because already mentioned volatility and variability. Indecision is predictable result if a lot of ideas and thoughts crossing one's mind. It may give a lot of chances, if the one isn't blocked by outer influences, but certain dose of indecisiveness and need to measure all options several time is present. But finally, after all measuring final decision is usually the right one.

Two of Swords is related to the first decan of Libra ruled by, traditional planet Moon. Well known, commonly accepted Libras' motive is staying in balance even if it turns in status-quo and keeping peace by any means. It usually leads to making compromises even if they haven't to be made and brings more discomfort than simply saying "no". Another fact is that due to keep peace and balance between everything, someone accepts what he doesn't really like or simply avoids unwanted facts closing eyes in front of them in order to avoid conflict. The logical next sequence of the story is ending up in state of Three of Swords, full of sorrow and discontent. Libra, the seventh sign related to seventh zodiac house and "others", is usually "reactive" contrary to its opposite sign Aries which is "active" and related to first zodiac house and "self". That theoretical explanation fits the reactive character of Two of Swords. Of course, in practice nothing is so one-dimensional.

If you get Two of Swords as card of the day, the way is to apply your intuition in interpretation and facts you already know about yourself. What is going inside of you, especially if there is something you want to avoid, intentionally overlook or overcome and don't want to show it out. Such things may be the key for interpretation what Two of Swords points to. To make it clearer, maybe it's the best to pull one more card for clarification. It may take you closer to the point are you just calm and relaxed or under tension and pressure which you want to hide. Apart of that, Two of Swords suggests you look deep inside yourself and get calm no matter what is going on around you. Stepping out, getting the guard down and metaphorically taking off blindfold will make you able to really act, not only to passively react.

This card is also very receptive and may announce that you are at this moment open for suggestions and influences. It's on you to decide which of them you want to let in and which to reject.