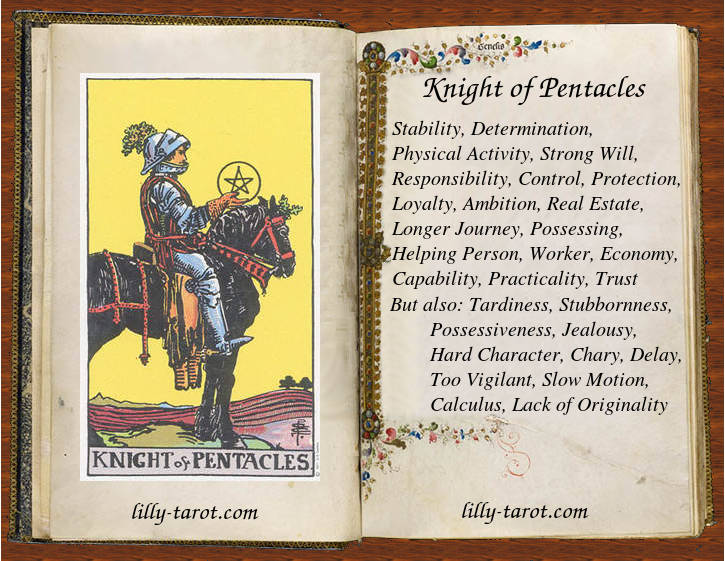 Knight of Pentacles, belongs to Court card family of Pentacles. As a Court card, it should be observed as a certain person, namely personal significator, type of personality, event, our personal relation to certain situation(or how we relate to certain situation), our acting in specific role or role we take on in specific event, part of our character along with others description in accordance to spread and question.

As a Knight, he usually represents younger adult, older teen or astatic person. Specifically it refers to male persons but not exclusively. Knights are, in some way, unstable in comparison to their older kins - Kings and Queens. They usually have changeable nature, so me and group of other readers relate them to mutable zodiac signs.

Person, who is type of Knight of Pentacles/Discs/Coins is usually cautious and distrustful, very often suspicious to everything and everyone. In one word, they are true skeptics. Regardless of usual presupposition of Knights, as fast, quick and ones who act straightforward and directly, this Knight could be hesitant and halfhearted. He would rather choose to move slowly and carefully. Thinking over and over again to do or not to do before he decide to make a first step. Once he has decided, he will stay on his path no matter how long is the way to final point. He will determinedly stick to his path and decision.

They are usually reliable people you should count on. Once you win their trust they will be there for you as real friends. Knight of Pentacles appreciates loyalty and seriousness. If he suspects you weren't sincere or even worse, you have done something behind his back, I wish you luck! They very hard reclaim their trust. They are not the ones who will stand up for retaliation but their cold and distant attitude will speak instead of them. In a quiet and severe tone they will say a few inculpatory words without living you space to say anything in your defense. They have memory like elephants. They remember for a life, and even they stay friendly they will probably often remind you what you have done and that they can't trust you as they did before. An ill thing about that is they may trip the idea of no loyalty and betrayal.

As a co-workers and colleagues they are hardworking and reliable. Not rarely, you may find them to be physical workers. Even when they are not physical workers by profession they like to engage into any physical activity because of their great physical strength and strong, massive body. Anything where they can put their strength in operation or doing something by their hands is attractive to them because they can see visual and physical result of their work. What is more important, others can see the result of their strength and craft. Somehow, that type of activities comes up as relaxation for them. Those are fields where they can quietly express themselves, in silence, without a lot of word and explanation. They are not thinker nor verbal type. Somehow, they seem to be a bit lazy to talk, and if they talk they talk slowly and it seems they need hours to express what they really want to say. As interlocutors they are stubborn, they stick to what is on their mind and seems they don't relate or really listen to the other one. Simply, they are not comprised nor giving a try to understand.

Pulling out Knight of Pentacles as a daily card, may relate to your attitude toward daily activities and events in the manner described above. It also include events such going somewhere, visit, someone's arrival, starting a journey or just doing daily duties in motion. As and executor, Knight of Pentacles may refer to executing daily routines or duties such paying bills, going shopping, repaying and finishing something which has taken more time than was expected. Something may be late or delayed. Patience is required anyway.

Knight of pentacles, as card of the day, suggest that this day is conducive for executive activities, finishing what is not done yet but has to be. Also, for boring activities that should be done, which take a lot of time and little creativity and inspiration. If you have to do something for someone else you are in the role of Knight of Pentacles. Activities such taking heavy bags from the market, where you need more physical strength than a brain are also under influence of Knight of Pentacles.

Beside that, this day is favorable for physical exercise such fitness, gyming or anything else meant for building physical strength. Maybe you need that type of relaxation as exhaust valve for tension deposited during last days.

Knight of Pentacles warns not to neglect yourself, your body and obligations. Also, not to be so hardheaded and too demanding toward people around you. Try to avoid pettiness and stress concerning small things. Don't let trivialities to get you into miserable position and avoid conflicts. No matter how much you think you can take on on yourself and carry on your back, don't overload yourself. Be a Knight, not his horse. Knight should have control over horse and direct his motion, not conversely!

Knights, Queens, King and Pages, have a nice evening and good start of the week!!