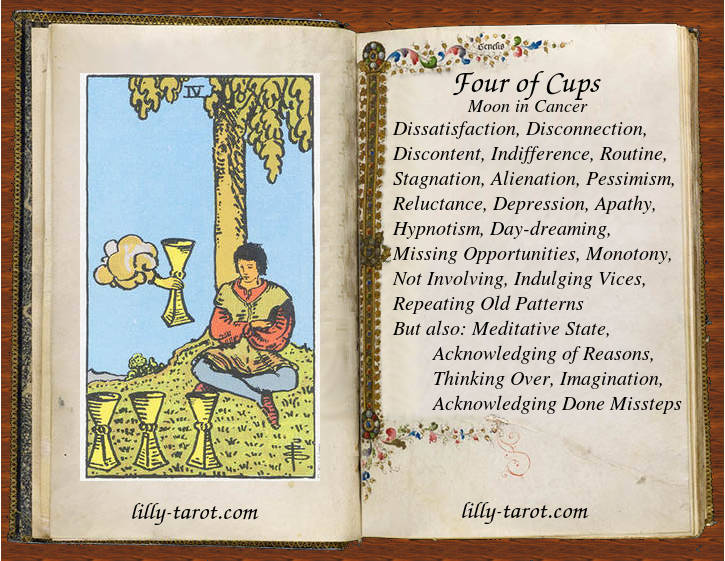 At the first sight this Four of Cups has nothing vivid to tell. But that only seems like that on the surface. Under the surface a lot is going on. This is not the classical story about emotions in meaning of being emotive. This is about living trough emotions. Perception is ruled by current emotional state and mood. So, The four of Cups talks a lot about moods, being moody and reacting accordingly to current mood switches. Self-absorption is deeply rooted, such an instinct or habit behind will control because of constant need for self-researching ones own feelings, thoughts and reaction. That's the reason why this card is related to mental issues. Not because the querent is really mad or mentally disordered but because he might feel like that due constant inner dialog with himself. During that dialog he is on the edge to lose the thread who is talking to him and who is a listener within his own head.

If you look close around you, you will probably recognize this type of personality. The wishful thinker who seems to be absent, immersed in his thoughts, walking around estranged among others. If he talks, he talks about his inner impressions, his imagined experience and vivid imagination, like they are completely real. He looks kind of depressive or melancholic because real world is not familiar with his vision of how world should be. You can't miss to notice his eyes lost in horizon to distant point, probably imaginary, and how with sadness in his dreamy eyes he seems like he is waiting for something or someone to appear.

Moon in Cancer is related to Four of Cups. Actually, the third decan of Cancer ruled Moon. Moon, as a ruler of this sign and as a ruler of its decan, is very pronounced if it's set between twentieth and thirtieth degree of Cancer. Moon is absorbing in his quality and subjected to changes as the fastest and nearest body to our earth. Moon phases are very well known to everyone. That mix of mentioned features makes it sensible. Every next absorption makes it more changeable and every change makes it absorbent for various influences. Cancer is per se sensible sign. Those who have strong influence of this sign or Moon in their natal charts may act very similar as personality described above. They could be very quiet on surface but have very rich inner world and imagination.

Negative influence of these features may be susceptibility to various outer influences and energies which could alter their states of mind even in a moment. As a result of this, they may develop addictive behavior. Addiction to alcohol, drugs, meds or addiction to any form of daily ritual and routine behavior. Then, they hardly come out from their comfort zone, being in their secret shell is more secure and familiar than outer world full of challenges. They are, simply told, beings of habits.

Otherwise, ability to submerge deep into yourself is precious. Comprehending your own nature is a life task for everyone, especially for those on the spiritual path. Acknowledging past mistakes, thinking over them and finding out the pattern of their repetition and personal unconsciously conditioned behavior is key which opens the door of freedom.

So, I may say, the Four of Cups is ticket for getting in or out from vicious circle of apathy, melancholy, confusion, thought disorders along with harmful habits and static state.

If you pick up Four of Cups as a daily card, like me today, it is a time for deep introspection of emotions primary, and then of thoughts, and trying to find a link between them. Which of them causes another one. I guess they both effect each other. Use that time for meditation, self-exploring and contemplation rather than for trivialities. Four of Cups warns not to get into boring activity just to make through day, it will just make you feel empty and tired at the end of the day. Routine activities could make you feel exhausted and drained today.

As the Four of Cups is related to Moon in Cancer it may make you feel more vulnerable and depending than ordinary. It also represents association to mother and relation with mother, so reassessing relation with your mother is not bad idea for today.

Four of Cups warns of missing new opportunity in front of your eyes while you think about triviality. So be careful and open your eyes, something is very near, almost at the hand. Instead self-absorbing attitude involve more into what is going on around and in front of you. Accept a gift you are offered, no regardless of form. This is surely something which will move you from the zero point. And don't be late, the offer is available today ;)