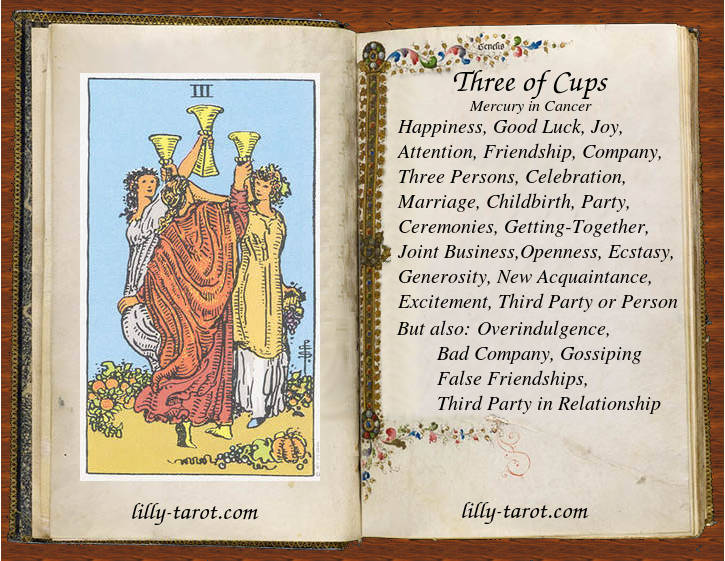 Three of Cups is the card of favorable influences in business, friendship, relationship and life. It is the card of growth and the first phase of realization in the matters of Cups. The Three is a unit of One - Ace and Two, thus the initial hint of love and affection has discovered its purpose. It is the first step of materialization, so what was born as an idea in Ace and consolidated energies in Two, it will develop and bloom in Three.

Very often Three of Cups points to the company of three persons or group of people rather than to a pair. Accordingly, it is more about friendship than the actual relationship, unless the pair is involved in the wider assemblage. So, not rarely, Three of Cups suggest marriage or other kinds of celebration. As the Two of Cups may represent a pair and Three of Cups first stage of completion, it could also be pregnancy or childbirth as realization and crown of the relationship between two. In that manner, the child is the third part.

Three of Cups, together with Threes from other suits, is related to Sephirah Binah, third Sephirah of Sephiroth on the Tree of Life. Binah is quite "female" sephirah, though it's difficult to talk about Sephiroth in that manner and to limit them to just one pole. In accordance with to its nature, it could be said that it primary includes female principle and characteristics. Together with The Empress and four Queens, which are also related to Binah, Threes also include female principle, besides all motherhood, form, realization and materialization. The Cups symbolize fertility in all meanings of that word and thus abundance which opposes restriction, limitations which form might give, and deprivation, which are all other faces of Binah Sephirah.

Zodiac sign of Cancer includes Two, Three and Four of Cups. The Three of Cups is specifically related to the second decan of Cancer which is ruled by planet Mercury. The whole sign of Cancer is pretty female in its features because it is ruled by Moon which is also the symbol of motherhood, fertility, nurturing and nursing. The planet Mercury is related to youth and children along with intelligence, calculations, communication, spoken and written words, and others brainy things such personal system of reasoning. The position of Mercury describes how someone expresses himself trough intelligence and thought pattern accepted through socialization, education and upbringing. This is expression trough communication - verbally, and practically through the practical application of talents and learned skills. Mercury is the mutual planet of both sexes, meaning "bisexual", so depending on the sign where it's placed it expresses itself through "male" or "female" features.

The word about astrological correspondences and correspondences of Three of Life has its purpose to make easier to understand certain card and its function in the Art of Tarot, in this case, the Three of Cups. If we take into consideration all described above it is much easier to get the clue in which ways Three of Cups may be expressed.

In positive meaning it is about youthfulness, children, female company, talking and chatting with close friends, making new pleasant acquaintances with the tendency to become closer, upbringing and nursing the child, gathering in the cycle of family, warm family or friendly atmosphere and so on. In the negative or its shadow meaning, Three of Cups expresses excessive behavior, over-self-indulgence, bad or false company or friendship along with treachery, avarice, crude desires, intemperate pleasure, vices, trivialities, gossiping, catchpenny, trumpery, paltry dealing, wasting time on cheap pleasures and entertainments. Other excessive expressions of Three of Cups, in extreme form, could be promiscuity, orgies and unhealthy sexual behavior (of course, accordingly to that what the subject of reading has as a notion of those). In a conclusion, Three of Cups and Binah could be very positive and pure in their moderated form, but when the Cups start overflowing, they express their corrupted form.

In daily reading, especially as the card of the day, I prefer to concentrate on the positive side of Three of Cups, because those negative descriptions mentioned above are the very extreme form of its expression. In the final line, it's up to personality, personal view of things, personal preferences and certain situation how it will be expressed.

Have a good night, stay lifted, be positive and enjoy good company. Hey, it's Friday (Friday is named accordingly to the Goddess Frida/Frigg/Freya/Freyja, the Norse goddess of joy, sex and pleasures, similar as Venus), it's time for party time!