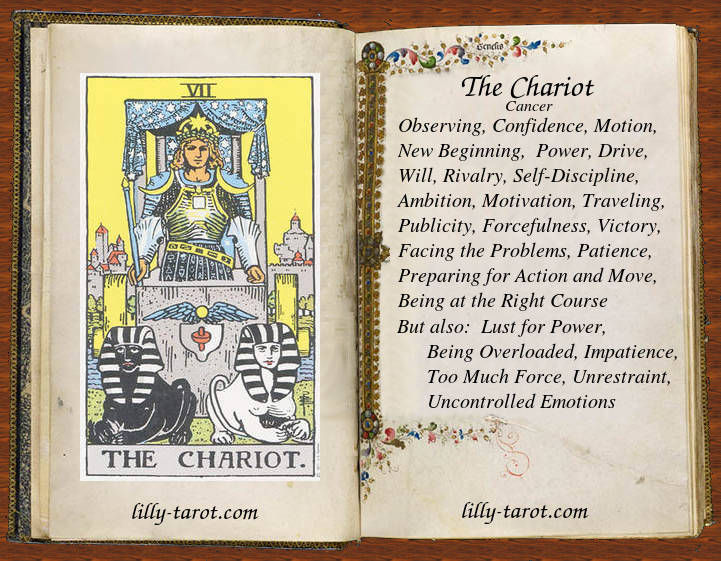 If you have ever wonder is there anything specific and interesting about the Major Arcana The Chariot and found nothing in particular unless moving forward, move, passion, victory, force, strength and similar attributes, you are the right place. Today, we have The Chariot on the road. As others Majors Arcanas I will observe The Chariot as an archetype, its astrological correspondences and divination meaning.

So, what is that which makes The Chariot different compared to to several others cards with similar meaning or with much of the same attributes? I've already mentioned some of those attributes and you can see they overlap with meaning of Strength, The Emperor and some Minor Arcanas from wands suit. The Chariot is complex archetype and regardless of fact that it is pictured very physical and often is given very physical meanings, it's actually quite abstract. I am going to explain the archetype of the chariot using two parabolas from ancient texts. One of them is Plato's dialog Phaedrus, where he utilized the Chariot Allegory to clarify his perspective of the human soul. He did this in the dialog through the character of Socrates, who speaks of it as a part of an exchange of the value of Love as "divine madness". Another is The parable of the chariot in Third Valli of Katha Upanishad. The third Valli of Katha Upanishad displays the illustration of the chariot, to highlight how Atman, body, psyche, faculties and observational reality identify with an individual.

The short interpretation and essence of both, Allegory and Parabola, should be represented in following manner. The coachman is sitting in chariot and navigates it. Horses are harnessed and they are driving force of the chariot and the coachman directs horses, controlling their heading and speed. He dictates where horses move and pull the chariot. On the image of The Chariot, instead of horses the sphinxes are harnessed but the point is the same. The coachman represents the soul. The Chariot represents the body. Horses are related to instincts and driving force what instincts are indeed. If you just imagine for a second the wild horse you will find relation between horses and the instincts. The instincts are wild, unpredictable, unrestrained and run their own if not under conscious control of the mind and reason. On tarot card The Chariot, there are two sphinxes of which one is white, the other is black. This opposing difference between sphinxes represent two opposite urges in human nature - the one leading to the path of light, the other to the path of darkness. The terms of the light and the darkness could be understood in many way but I will try to keep it simple here. They also associated to urges of Eros and Thanatos from the myth and Freud's theory of Life and Death Instincts. And finally the mind and the reason are represented by harnesses. I chose this division and comparison in order to include all elements of the chariot - the charioteer, the chariot itself, the horses and the harnesses. On the image of The Chariot in Rider-Waite Tarot deck there are no harnesses visible, so that I ascribe to harnesses would be part of the charioteer - the mind and the reason, such in Plato's Allegory with difference that the chariot represents the human soul on its journey. The Chariot form the Upanishad represents the body, such in my description, intelligence and the reason are charioteer and the soul or the Atman is rider in the chariot. On the card we can't see anyone inside the chariot, at least not in Rider-Waite deck, nor in Thoth deck where four cherubs pull the chariot. As you could notice, Plato was centered at the soul represented by chariot while Katha Upanishad has more physical approach to chariot which represents the body. I find both of them valid for the purpose of revealing the meaning of The Chariot tarot card.

So, The Chariot, in my view of things, represents a complex archetype of human being as it have been understood since the very past ages till today. I don't mind about small differences in various interpretations because understanding of one of them is quite enough to get to the point. Human being has the soul, the body as the vehicle of the soul in this life - its tree dimensional carrier, the instincts as the driving force of the body - the vehicle and the ratio, intelligence and the reason as the nexus between them, because the mind can understand and receive the wishes of the soul as well as needs of the body and urges of instincts and consolidate them in wholeness known as The Human.

Many of tarot authors and researchers assign the sign of Cancer to the Major Arcana the Chariot. As I already mentioned, sometimes some ascriptions seem to be lame and forced in way just to make some mirroring. The only relations I could find between the sign of the Cancer and trump The Chariot are next: two crescent moons at the shoulders of the charioteer, from which emerge human-like profiles, the charioteer in chariot as cancer inside his shell and relating the Moon which is ruler of Cancer sign with the souls and emotive and sensitive side of human. Two crescents represent waning and waxing Moon's phases, which have opposite influences on humans body, soul and mind. Two faces above the crescents look in opposite directions dictated by the opposite influences of the waning and waxing Moon's phases - the similar as black and white sphinxes. The second relation between Cancer and The Chariot is about: charioteer in his chariot is kinda armor-clad and protected such the cancer is in its sherd. He is cautious and observes when, where and how to move, and feels secure while inside his chariot like a cancer in the sherd. By the way, cancer's sherd is kinda his chariot. And the third relation about the Moon body, Caner sign and human soul could be observe trough cancer itself again. The fragile and soft cancer flesh is inside the firm sherd as its bearer such the body is the bearer of human soul in tree dimensional realm.

As a card of the day or in daily divination, The Chariot often represent the move, moving and driving force and will to get somewhere. Getting somewhere could be understand very physically but also as getting somewhere at all - in life, in future, reaching goals and giving your life a purpose. Everything is about getting somewhere. All what we do is about "getting somewhere" or getting something. It is about the purpose we want to achieve. And without a purpose there is no motives, no driving force or moving, literally or metaphorically. So The Chariot also represents a purpose, the will to reach that purpose and strong decision and desire to go that way which leads to accomplishment. Looking from that side it is a card of victory and triumph. Primary the victory and triumph over own self. And the precious victory over own self is possible as much as the consolidation between opposites inside human nature is well done and achieved. Without that there is no direction, no straightforwardness, directness, determination, dedications which are necessary in any venture which leads to accomplishment and fulfillment. After victory over self, then the victory and triumph over rival is possible. Remember, The Chariot is also speaking about rivalry and victory over rivals but requires some effort, endurance, patience and self-control.

In very literal meaning The Chariot may refer to going somewhere or traveling, moving or change of place of residence, especially if your work and profession require it. As the sign of Cancer is relater to native country, The Chariot may announce leaving or coming back the country. In a physical context, as chariot represent the body and is meant to move, The Chariot has it interpretation for physical level too. It is related to doing something with your body, using your own physical strength and force. It could be exercise or physical work, often hard which requires firm body. On the other hand decently firm body and body well-being are often prerequisite for other activities were they mental, manual, creative or spiritual. At least maintaining body in food shape makes many other non-physical activities easier to handle and beside all that has positive effect on self-confidence. The chariot mirrors the charioteer, meaning the body mirrors the state of spirit and the mind. On the other side, as much the chariot is well maintained as much it will serve the charioteer.

Have a good traveling in your Chariot!