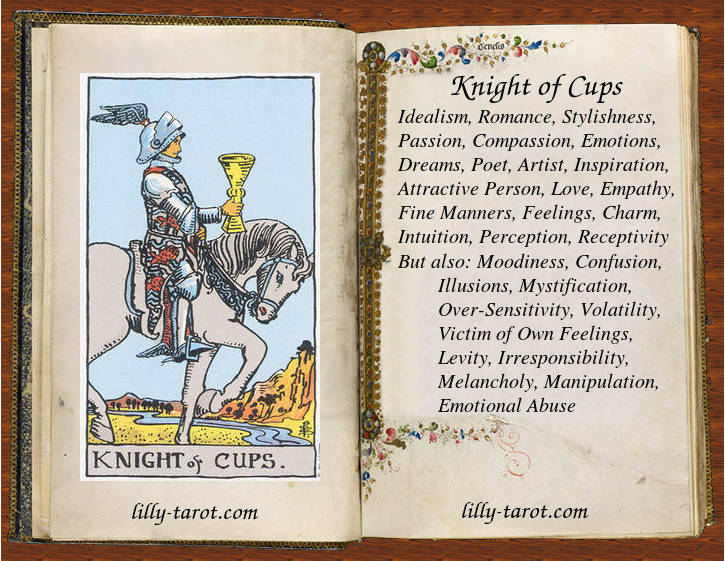 Knight of Cups, similar as others court cards, may represent a certain person in the reading, current position of the querent or subject of the question, current situation, an event, inner process, subjective feeling of the querent toward question or objective state of the subject of question. Depending of the question, court cards could be read differently and very often give us a mixed meaning, in the same reading they may represent both person, event or incoming trend.

Anyway, if you are hunting for black Audi R8, I suggest you to look for King of Pentacles. This guy, Knight of Cups, is rather into his dreams, imagination, idealist view of beauty or any kind of art than into Audi. Simply, he doesn't make money, he makes art, and sometimes he makes illusions. But this is self-explanatory. He lives in his dream world woven of his fantasy, desires and feelings. The source of his inspiration lies beyond the visible world and is kind of illusory. Not rare, he gets trapped into his own illusions. No matter how much is he receptive and intuitive, he often sees only what he wants to see and what makes him feel exalted. These are usually idealistic views of beauty, love and life in general. But don't be confused about what idealistic view of anything means to him. It ain't necessary fairy tale and only "love & light" things. There are very varying senses when it comes to his aesthetic and ethic understanding. That what matters to him may mean nothing for many and what matters to others may mean nothing to him. And what matters for him for today may mean nothing tomorrow. He is quite enigmatic and hard to understand, above everything he is volatile and it is almost impossible to detect his next move. Sometimes, he just simply finds it's hard to explain clear what is on his mind and put it in verbal form. But sometimes he also finds his benefits in being misunderstood, confusing, mysterious or enigmatic. Actually, he tends to leave mixed impression of all of those features about him. Why is he doing that? The answer is often very simple... He likes to be covered by veil of mystery. It gives him needed feeling of security and certain dose of control above current issues. If there are no illusions there is no mystery, no magic, and he feels his power is vanishing. Without that his world is falling apart, becoming dry and boring.

In positive meaning, Knight of Cups type of personality is very sensitive, friendly and compassionate. They may have amazing artistic abilities and very unique artistic expression no matter is it painting or poetry and literal expression, dance or any kind of craft. The art is their preferred channel communication with the world, rather than words. They are imaginative and empathic. As friends, maybe they can't offer you practical help, reasonable advice or financial support, but they will be able to understand how are you feeling, even without a lot of explanation. If you need a one to cry with you or shoulder for crying, beside Queen of Cups they are the best choice. Somehow, they may lead you to come to the root of your emotions and inner being and get out from you the facts about your emotional world that even you haven't known before. In their positive aspects they will never abuse the facts they know about you, use them against you or reveal your secrets. As romantic partners they are sensitive, romantic, compassionate and passionate. They are also deeply intuitive and may sense every change of mood of their loved one. Their amazing ability to get deeply onto someone's heart is their gift or curse, or both. As they have nose to sense others feelings and moods, they also can sense what have caused them. It means they will easily smell betrayal, infidelity, affair or simply that the things are not as they were before. As they are romantic and sensitive souls who would give their whole love for one single moment of beauty, delight and love, it may deeply effect them and cause great emotional pain.

In negative meaning, Knight of Cups personality could be extremely volatile and untrustworthy. They still can be highly intuitive and receptive but without real emotions and compassion, at least not deep and long-lasting. Lies, deceptions, machinations and spreading illusions are their favorite games. Though, they are often not completely aware of how they actually act nor of consequences of what they do to others. Then, they will use their imagination and artistic abilities with only one purpose - to charm everyone around them and involve them in their secret game. Their intuition and receptivity will be used to cunningly get into mind and hearts of their friends, partners and acquaintance in order to find out their deepest secrets and weaknesses. Of course, as they lack sense of morality and honesty or simply lack awareness of them, they will easily abuse trust they were given. Even in negative aspect, they still leave the impression that they are romantic, benevolent, sensitive, openhearted, sincere but the impression they leave is nothing more than one big illusion. Actually they are pretty flawed. As masters of confusion, they can make you believe in unbelievable, that gray is yellow and sky is green. Hard thing to be noticed is how they are spinning your mind all the time, gently but surely. Finally, you ask yourself were you insane, blind or stupid not to notice what is going on. It is the price of this crazy experience. At least, next time when you meet super charming and on first sight perfect person you will think twice what is behind the surface. And behind the surface is usually well skilled manipulative person but at the same time deeply insecure and fraudulent.

Astrologically, Cups are related to water element and court cups cards often represent persons whose zodiac sign is Cancer, Scorpio or Pisces, or have highlighted water elements in their natal charts. Some tarot readers relate Knight of Cups with zodiac sign Scorpio and others with Pisces. Personally, I rather relate fixed signs with Kings, cardinal with Queens and mutable signs with Knights. So, in my reading, Knight of Cups is mostly related to Pisces zodiac sign in general, and more precisely Knight of Cups include last decan of Aquarius and the first and second decan of Pisces. Pisces is the sign which very well fits the description of Night of Cups. They are in their positive aspect tender, romantic, empathetic, highly spiritual and intuitive. Their receptive nature keeps them close to their dreamworld and idealism but also makes them susceptible to mood shifts, volatility and unstable will. Often obsessed by their vision of beauty they would rather live in their imaginary world than cope with day-to-day things. They could be also extremely contradictory within their personality which sometimes makes them confused about who they really are, what they really feel and want. Not rare, the same thing confuses others around them too. At the same time they may seem so wise and such "old souls" and yet so naive and childish. Negative aspect, if pointed inward, makes them susceptible to depression, self-delusion, opiates, drugs and alcohol abuse, different kinds of phobias and self-destructive behavior. If it's pointed outwardly they are prone to lies, cheating, affairs and deceptions. The fourth type is mix of previous three, where it's really hard to estimate which of their many masks they are wearing on at the moment. No matter to which groups they belong they are usually super charming and attractive, at least at the first sight. They know that and would gladly use that advantage in reaching their goals, whatever their goals are.

If Knight of Cups is your card of the day or appears in daily reading, it may represent you in the role of Knight of Cups, or an inner process, event or other person. If it's about you, you will probably feel artistically inspired and spiritually exalted. It would be awesome for that energy of find its expression, it's sad when it's wasted. You may find yourself being very receptive and susceptible to outer influences lately so beware of moods swings. Under outer influences I don't mean simply succumbing to someone's will, but subtle suggestions could be a problem along with "picking up" others energies, feelings and moods which mix with your own. Extreme ups and downs are very possible such passing trough state of high euphoria to deep sensitivity and even depression. If you are aware of it and cause of possible depression you can prevent it and enjoy this inspirational state. It's better to avoid bringing important conclusions and decisions because they will probably be colored by temporal feelings and impression. No matter if they are positive or negative, they just could be wrong and exaggerated. During these Knight of Cups days you may experience higher intuition than ordinary and feeling that you "just know something" but the main question is is it pure intuition or one more exaggerated feeling which may takes to completely wrong way. Live for the moment, enjoy the offered pleasures and give yourself into to the maximum but just don't take anything for granted these days and don't expect it to last. The less expectation, the more you can get out of this. You may experience the most beautiful things but the problem with them is as they came as so they may disappear, right in the moment when you take them for real and serious. Everything related with Knight of Cups can be so good to be real and even less stable. The same is valid for events and other persons also, represented by Knight of Cups.