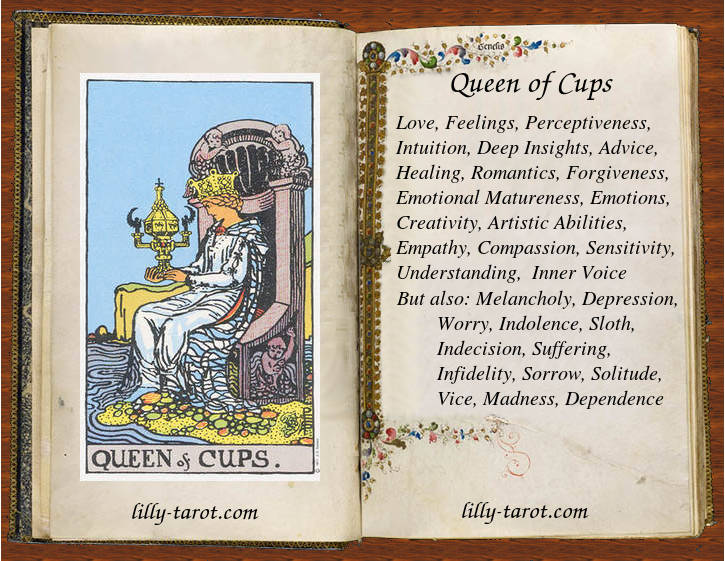 Queen of Cups, as a Court card, should be observed as a certain person, type of personality, event, our personal relation to certain situation, the role we take on in specific event, part of character which is mostly expressed in some period, temporal state accordingly to question or just as a describe of situation to which is question related. Also it could be personal significator card, used to represent certain person.

As personal card or if it refers to certain person, it usually represent a mature woman. She possesses pleasant outlook and radiates inner charm. Mostly quiet and kind she sometimes seems to be shy in her expression. Actually, she is very aware of what impression she leaves to others and takes care about how she represents herself. She really knows very well what she wants to achieve and how she wants others to see her and acts in accordance to that. Although she has specific character she can very easy switch her personality and act as someone else. It doesn't mean that she is liar or actor, thus she could be, but simply possesses chameleon's abilities of accommodation. Many things may affect her such atmosphere, other's behavior or temporary events and surroundings. She is very subjective to others people's energies and what they direct to her. There is no doubt that she is highly sensitive and intuitive due to her abilities of empathy and compassion, sometimes seems to be as real psychic. Her abilities to look deep and see beyond the surface sometimes seem to be the gift sometimes curse. As she is very sensitive, many things she feels and senses may hurt her deeply. In her basic nature she is lovely, calm and forgiving and wouldn't do any harm to someone else. But if she finds herself hurt, betrayed, cheated and tricked she may act contrary to her basic character. Here we can see how she can use her gifts for not so noble deeds. She could be a master of pretending and player on the card of other's weaknesses. And she is very good in that role due that she knows very good what hurts most. On the other hand, her abilities of seducing could be amazing only if she is well balanced. Her power of seducing lays, again, in her natural understanding, intuition, compassion and empathy and many could be attracted to her just to taste the lave and easiness she spreads around. But there is also lays a potential danger for her. She may find herself used for other's selfish needs and her giving exploited. At least, nobody likes to find his good will and help exploited.

Many may see her as a helping hand, adviser, good listener and so on. Indeed, she is, though her help often could be everything but the least practical and material. Practical, material and physical plane are just not in her domain. She is mastermind for emotional and psychical stuff, and those are plains where she may give her best. Her insight into others emotional state comes from her very developed imagination and capability to project herself onto the other one. Then she may forget her own self and just absorb the states and feelings of the other one. Her advice and tips seem to be wise and very logical, though she doesn't stick to logic, common sense or specific thought patterns. Furthermore, she doesn't even try to involve into mental speculation nor to be involved into mind battles and games. In that way she circumvents the common sense and explanations which seem to be reasonable and logic for mental understanding but false into the real nature of the subject, and goes farther into real core of the issues. Due to that, she could be excellent as a counselor, adviser, therapist, or in professions such psychology, psychoanalysis, healing or consulting. She would also be good in work with kids, any artistic occupation, as a nurse or rehab therapist.

As she is highly sensitive her moods may switch from the highest level of euphoria to deepest sorrow. Not rare, she is weepy and doleful. Even if she is really happy she may have a few tears in her eyes.

Queen of Cups is related to mature female representatives of water zodiac signs which are Cancer, Scorpio and Pisces. Due to her fragile nature, at the first sight, Queen of Cups is more likely to be related to Cancer and Pisces than Scorpio. It doesn't hurt to mention that she isn't that weak, as she may look, moreover she has great inner strength based on trust in her instincts and intuition so she doesn't feel need to show and prove her strength and intelligence in public. Of course, things are not so determined that only woman of water sign could be represented by Queen of Cups. It could signifies man as well, representatives of any other sign who fit Queen of Cups features, or younger women who are mature in emotional matters. It means, they know what they want and expect at emotional level, they have achieved emotional intelligence and learned to trust their inner voice and feeling, no matter if they are still young. I usually use to observe Queen of Cups as significator of woman who has mostly present water element in natal chart or has water temperament.

Primary, Queen of Cups is astrologically mostly related to third decan of Gemini and first and second decan of Cancer. Cancer is cardinal water sign, herald of the summer season. Transition between Gemini and Cancer, which is withal transitions between seasons in the day of summer equinox is period of waters rising, unstable weather which could be hot and wet at the same time, shiny and cloudy. That very good describes this Queen and her changeable mood susceptible to outer influences. Rising of waters in this period has its purpose to nurse the earth and prepare it for upcoming period of hotness and dryness. The roles of Queens always have something with nursing, fertility, preparation and adjustment for upcoming changes. For that reason Queens act ambivalently, absorbing and surrendering, these are all means of adjustment and manipulation to certain circumstances.

As daily card, Queen of Cups may represent period of higher than ordinary receptivity and sensibility expressed trough intensive and meaningful dreams, high intuition and rising sense of empathy and compassion. But she also may announce a period of higher sensitivity and susceptibility to subjectivity, mood changes and daydreaming so meditation and surrounding by peace could be of help. It is good time to peek into inner self and deal with unclear and confusing emotions, if they are there, and bring more understanding into them. Trying to understand and perceive your own subjectivity could be helpful.

Queen of Cups may also signal creative projects or job, occupation by creative hobby, rising of inspiration and imagination and generally success in those areas. Visiting a psychic/spiritual adviser or counselor or therapist is possible and recommended if there is insurmountable emotional, psychic or spiritual problem. As interests for psychic and spiritual sphere are rising in this period, visiting psychic or spiritual adviser could be also done just for fun and curiosity or in purpose of investigation in those spheres.

If you pull out Queen of Cups as card of the day it may also mean you will be in the role of this Queen and give someone help, support and act as an adviser and almost healer. You may rise your sense for other's need and acknowledge how to better understand them. Trough the influence of Queen of cups you may learn how to be unselfish and what is unconditional love, love per se without expectations or hidden selfish and ego trip motives. Being in that role you'll be able to connect with your most gentle feminine aspect and acknowledge the power that comes from it what may make you incredibly seductive.