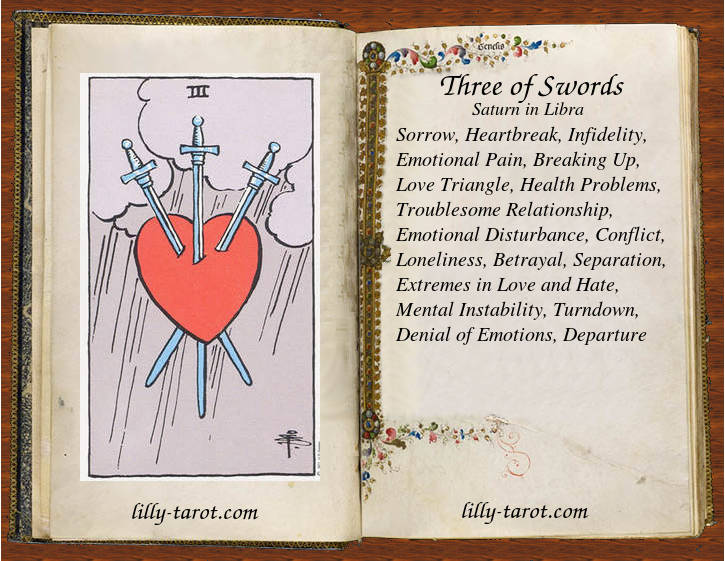 Three of Swords is one of most unpleasant cards in the deck to deal with. The image of the card doesn't give any hope for happiness or joy. It's kinda obvious from the image of this card that it tells us about pain, sorrow, betrayal, unhappy love, broken promises and heartbreak.

Three of Swords may describe any conflict between person and his loved ones in which someone's feelings are deeply hurt, but most of all it is about the conflict between love partners. Usually here we have the hurt one and the one who did an emotional harm. Often the "culprit" one is not aware of how his words, actions and behavior affect the other one, who is facing the bitter truth that his beloved partner is autistic and insensitive toward him. The hurt one has a feeling that his partner doesn't have respect nor sympathy for him and his feelings. It leaves an open space for any kinds of doubts and mistrusts. At this point starts destructive spiral of anguish and insecurity. Insecurity in own values and insecurity in partner's treatment. It necessarily leads to discord and probably separation as well. Feelings of guilt and wounded dignity, love and hate, pain and desire for revenge alternate each others and make this confusion even worse. Outer and interpersonal conflict becomes inner and intrapersonal.

The pain here could be both emotional and physical followed by cloudy thoughts and mental anguish. Three of Swords describes wounded heart, metaphorically or literally. Sometimes both, such as in case of broken heart syndrome. No matter how it may seem painful, separation here is healthy and reasonable choice. It will not be an easy step but it is the only way to break out of vicious circle of self-underestimating, anguish and bitterness. At the same time, it is the beginning of healing process.