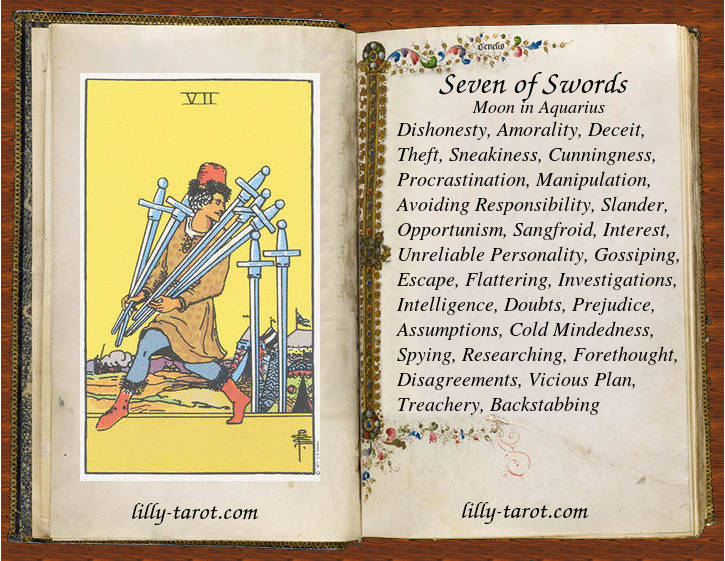 Some of traditional meanings of Seven of Swords are futility, incomplete success, failure, insufficient effort, but also wish, hope, attempt, trust. I can't completely agree with all of listed traditional meanings and rely only on them in reading. From personal practice and readings I haven't noticed yet that Seven of Swords has anything with trust but contrary. Unless trust here means trust in one own self, personal instincts, intelligence and uniqueness.

As one from the Swords family, Seven of Swords is dealing with mind, intelligence, ratio and mental energy in general. It represents applying mental energy and capacities into providing an idea or attempt to make something work out. It is about calculations of many kinds, so normally it includes a lot of doubts and questions, suspicions and investigations. Looking for patterns, researching reasons, intentions and motives, thinking what is behind the scene are parts of this mental gymnastics which could be quite exhausting.

As with most of Swords cards Seven of Swords isn't one of those "positive" cards what we usually like to see in the reading. Though, it doesn't seem so cruel as Ten of Swords, not painful as Three or Nine of Swords, but there is still something weird and tricky with this card. Many times it is not so clear what Seven of Swords actually suggests in the reading so the reader have to pay attention to surrounding cards. If the question includes certain person, yourself or someone else, you can be sure that this person is involved into mind games as subject, as object or often both at the same time. It may be you who are investigating other's intentions and secrets, the one who suspects and makes assumptions. Otherwise, it may be you who is under the loupe of someone's else.

In general picture here we have two or more actors involved in the game of Seven Of Swords. This "Game of Swords" is shady, concealed, timeserving, immoral, deceitful and injust. Even brutal if interest and ambitious overpower the last stand of humanity and empathy. Nothing is forbidden in this game including betrayal, backstabbing, conspiracy against someone, cheating, stealing, slandering, blackmailing and manipulation. All of that in order to gain advantage over others and over situation, or to gain wished prize with less effort and work. Seven of Swords is predominantly mental card so in some way it implies more thinking less working, thinking of how to avoid responsibility and effort. So stealing here is not always literal, it may refer to stealing someone's ideas and using them.

It doesn't always necessary include a dirty game, but some dose of tricks and aces up sleeve is usual. It may also refer to having an extraordinary plan which would bring success and recognition over the night. But realization of such projects isn't certain, just because of shortcuts and rush. In such case, surrounding cards, especially those which come after Seven of Swords, will give more information whether it will succeed or not.