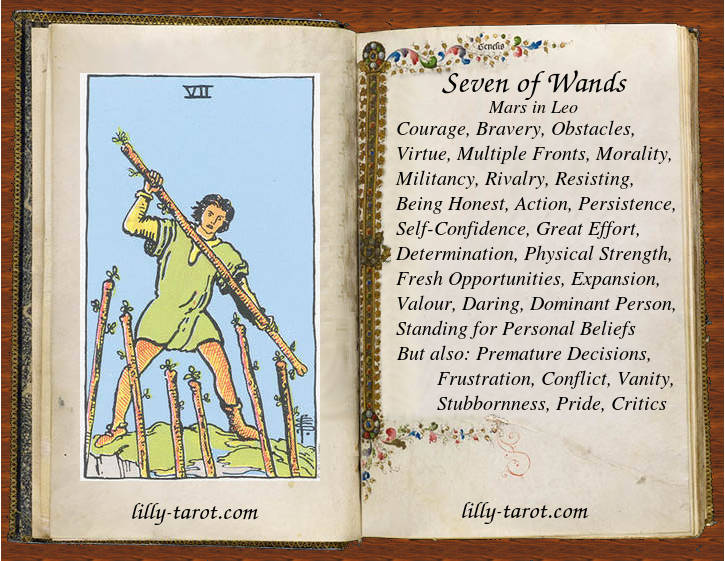 Seven of Wands describes a situation you can often see in movies. There is hero in main role who is extraordinary brave and ready to do all possible and impossible things in order to defend and vindicate his beliefs, reasons, ideals, strongly to stand behind what he deems is right, to be victor or decedent. He is not only brave, he is also honest, noble, persistent and determined on his way. He fights for his or someone's else right, for weaker and his mission is expulsion of justice to the daylight. Very often, he has a lot of mean enemies who try to attack him from every side and prevent his success. Many obstacles are on his way but he is willing to get into clinch and cope with it. He is passing trough a lot of troubles and crisis and often he is left alone. So called friends and people of trust often leave him stranded just in time when they are most needed. So he finds himself left behind, alone and betrayed. In mid time he is getting into many temptations, his will is becoming shaky but somehow he is finding and drawing more strength from himself to stay on his way. His pride may become broken and his confidence thwarted, he may become renegade and outlaw, his words and deeds neglected and rejected but he will still stand for his believes, ideals and what he thinks that is right. Till the end of the movie, our hero is usually victor, he defended his honor and return his glory. He appears again as the honest and right one and the justice he fought for is defended. Now he is again favorite of many, even of those who left him previously.

If you thought it's just filmy stereotype and such heroes exist only in movies and novels, well they exist in tarot and real life too. Of course, one but big difference is that real life isn't Hollywood movie and unfortunately, doesn't always have happy ending. There were, are and will be many such heroes who fell in fight for ideals, justice and the truth. But they try, give their best, persist when it's the hardest and what's most important they know for what they do what they do and find it as worthy of effort.

In general, Seven of Wands isn't such negative card as it seems to be frustrating. Obstacles and challenges are present but also a great strength and strong will to make things clear. Being left alone and aside without any support is one more feature of Seven of Wands which is frustrating. Feelings of uncertainty and insecurity are here but also a great determination to stand behind and protect personal beliefs and stances. The querent already has the advantage position over opponents and big chance for success. Seven of Wands also suggest more than one opponent, rival or adversary but advantageous position promises a big chance of success in fighting opposite, hostile forces and unwanted influences. One of the biggest drives here is faith and confidence in personal rightness, honesty and fairness. All of those opposites, obstacles and challenges act in some way as a tests for personal inner strength and endurance, no matter if they come as embodied in certain persons, just as events and issues or energies which come as outer and hostile.

As many of you have already known, Sevens are related to seventh Sephira at the Tree of Life, Netzach, and Netzach is related to planet Venus. Again, I have to mention that those relations and correspondences are quite open and wide in their meaning. So maybe the best way to express and explain them would be to say that they are very close, aligning themselves to such map, but surely do not completely replicate each other. Netzach and its relation to planet Venus and Sevens from the Tarot are good example of that. Today, astrologically Venus is perceived as quite peaceful, cuddly goddess of love, beauty, partnership, agreements, feelings and aesthetic. Traditional Venus and their equivalents in others myths and ancient cultures weren't so cute and peaceful. Especially in the culture where Tree of Life was born as philosophical and metaphysical system and representation of known universe, Venus'es equivalents were known as goddesses of love but also a war, discord and temptation. Maybe the phrase that in love and war all means are allowed comes from that time... So the Netzach has a militant feature as well. Translation of it speaks itself - the Victory. If there is a victory there was conflict at first. Victory could be over any outer or inner influence, over others or one self. Considering the temptations, victory could be over the temptation and considering the emotional Venusian aspect it could be a victory of one's emotional side if the emotions takes the control over the being or victory over deep inner emotional urges and control over them. The influence of Seven of Wands, as others Sevens, is based in depths of emotional nature as emotions are very strong forces which may lead to highest highs and deepest lows.

Seven of Wands may refer to great amount of physical strength and rising energy levels. Especially if it's in combination with some of Fives or other Sevens it may result as aggression or endurance. In combination with Five of Wands it will result as rising of energy but also aggression and fighting temper. On the other side this combination is great for martial arts, sport or any intensive physical activity. Surely, such activities are favorable in order of channeling and controlling this energy and perhaps aggressiveness. Combined with Seven of Pentacles it will give steadiness and endurance. Together with Five of Swords it warns of very aggressive and threatening environment and so on.

Some of the main aspects here are defense and offense. It's already mentioned that Seven of Wands suggests that the one has been attacked from many sides. Very obvious, he is on defense. But because of that simultaneous attacks he may develop over-defensive attitude and personality. Due to principle that opposites follow each others and get developed as compensation, other side of coin is developing offensive attitude toward others and life's situations in general. It is established truth that attack is sometimes the best defense. Again, as opposites follow each others and like attracts alike, too assertive attitude may cause exactly such issues of having many adversaries.

Astrologically, Seven of Wands is related to the third decan of zodiac sign Leo. The Leo sign is ruled by the Sun and the third Leo's decan specifically is ruled by planet Mars. Both astrological planets, the Sun and the Mars, are fiery in their basic nature and Leo is fixed fiery sign. So here is the word about very highlighted fiery character. Mars is impulsive, impetuous, militant, representative of raw force, and like that, has found well expression in fiery fixed sign like Leo. Here he doesn't lose his fiery attributes but impulsiveness and impetuousness are mildly settled and more stable because of the fixed character of Leo. Leo is known as a noble sign so the Mars here has exalted and noble goals. His fighting character is appointed to honor, reputation and glory and won't fall that low to deal with trivialities. It really fits the premise of Seven of Wands warning that maybe something isn't worth of fight, energy and effort, that leaving the battle may bring wanted victory and honor. As the Seven of Wands also deal with Netzach and its deepest emotional urges it is talking about reasons are deeply based that in emotional sphere. And that may bring great strength or weakness. Doughty nature of Leo, Mars'es warrior character and emotional urges of Netzach mixed together give a noble picture of idealistic warrior who fights for his greatest ideals, values and principles, very emotionally involved and with true beliefs. The personality who fit these feature is often assertive and piercing, kinda aggressive in attitude but also honest, fair-player, individualistic, idealist and noble. They rarely pass unnoticed by many, and if that happen they will very soon make something to get noticed and honored. Not only because they like it but simply because that is in their nature.

As the card of the day or in daily readings, Seven of Wands may signal that your inner strength and patience will be at the test. You may experience a situation where many different things are expected from you and you need to deal with all those problems. Actually, they doesn't need to be problems but it could look like that at the first sight. If more people require something from you, you may easily find yourself in position as being attacked from many sides. It usurps your comfort and disrupts your pace. Resolving those challenges require from you to use your previous experience and knowledge, to arm yourself with patience and determined to jump into "fire". If there already is a certain stress caused by stockpiling of duties and requirements Seven of Wands may mean that you are getting overloaded and that it's time to cope with it and widen your personal space and opportunities, such as resisting the pressure from the outside and outer influences.

If you really feel attacked and in position of defense and protecting yourself, your interests, property, reputation or anything else you might be afraid of losing than you should meditate on this card. No matter what you worry about, researching yours and others reasons and trying to be objective toward matters at hand is worthy of effort. This is also a card of affective reactions and cool head and clear reasoning are more than welcome. Putting up your priorities in front and knowing what you are fighting for and with which reason will direct and channel your energy in the right direction and toward achievement your goals. Directing and channeling energy is very important with this card because it may prevent a lot of troubles caused by anger and aggression. Anger is quite normal emotion but it's much better if it's under control and turned into driving and constructive force than into self-destructive impulse which may waste your energy on unwanted results. Thinking over twice about entirety of situation is well worthy of effort. The name of this card in Thoth deck is Valour, so if your intentions are clear, your beliefs and ideals strong and goals noble, it will lead you to success and will work for you. Remember, fortune favors the brave, and glory too. So if your honor and reputation are threatened be ready to stand for yourself and protect what is yours.

A lighter expression of this card could be rising of energy and feeling ability to handle more than ordinary. Then, this could be a great time to do something new, something big, to widen your opportunities or to deal with things what were on hold waiting for resolution.