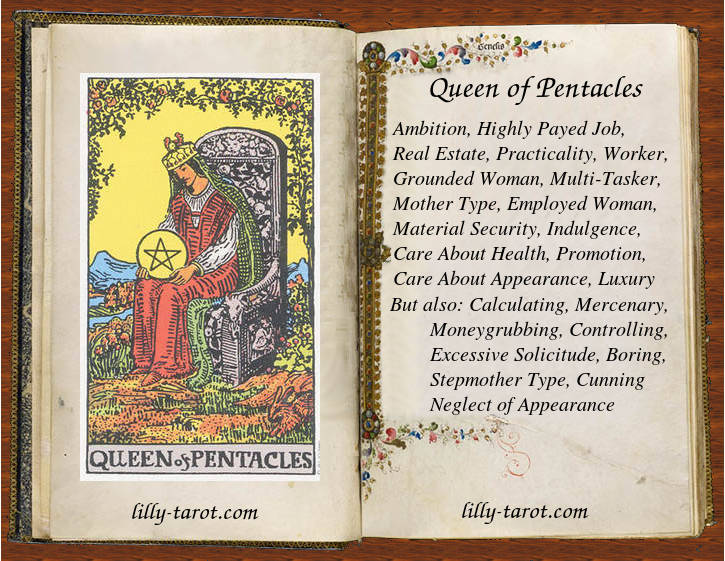 As with others court cards, Queen of Pentacles may represent a certain character as a group of specific features, the woman who is that type, usually the motherly, caring type. It may also represent events, issues, processed, periods of time, personal significator, acting toward the certain situation and so on.

As a representation of the person or as personal significator Queen of Pentacles is usually seen as motherly, caring type. But the other side of the coin is her stepmother attribution. Being caring is a quite good characteristic but if behind that is hidden controlling attitude and behavior and caring is just a mask for it, well it throws quite different light at this lady. She is very grounded and physical type, thus she is practical and oriented toward manifested results. She doesn't need to be so clever and intelligent because lack of these features she compensates for work, effort, endurance, perseverance and commitment. I don't want to say that she is stupid but simply she is not Queen of Swords and will never have such sharp mind and pervasive intelligence. The intelligence of Queen of Pentacles is very terrestrial, even primitive in some cases. She doesn't try to be original because she knows her limits very well. And knowing her limits is her biggest advantage toward so much more intelligent, innovative and capable individuals. Her logic follows the principle of pros and cons, gains and losses toward her interests which are very often very materialistic and based on simple material security such having nine to five job, house, possessing very ordinary stuff which is meant as common. She is considered to be loyal to her partner, family and job. But don't be confused, this loyalty is mostly based on her interests. It doesn't come from love and heart such is the case with Queen of Cups, not from passion and ideals of Queen of Wands and not from real mental involving of Queen of Swords. This lady most appreciates financial security, social status, regular income and comfort she gains from that. She is from those who talk loud how are they good and caring mothers, committed and loyal wife's, dedicated to her home and family and ethical at her job to gather recognition and honor of others. Oh yes, everybody is looking for wicked, uncaring, disloyal, lazy, undedicated, unethical gold digger slut:) Because she knows she is not so special in anything, she tries to always be in company of more interesting individuals so some piece of glory may come her way and to keep her social status because she can never know who will be useful in some moment. So she repeats and agrees with words of more intelligent one, she imitates compassion of more sensitive one and excitement of more passionate one while she has only her interests and security on her mind.

Obviously, I am not the big fan of this card. Yet, I don't think that every Queen of Pentacle is a stupid would-be cow. There are really nice specimens among these Queens. And they really are loyal, commitment, caring, ethical and hardworking persons but they are usually not so loud about their "achievements" and don't pretend to be something they are not. But these specimens are rare... One turn back to similarities between The Empress and Queen of Pentacles - Queen of Pentacles has gathered this specious similarity with The Empress just because of very versed imitating skills.

As an event, appearing of Queen of Pentacles in reading may suggest promotion, fruit-bearing work, successful business, involving into practical matters, resolving of the financial situation, gain, starting a health improving program, working from home, employment and even a pregnancy. It may also refer to home matters such arranging place of living and make it comfortable.

Astrologically, Queen of Pentacles is usually related to female representatives of earth signs such Taurus, Virgo and Capricorn. It's not a rule, as you already know. She may also represent a person who has dominant earth signs in the natal chart or has the earthly temperament. Physically, Queen of Pentacles may represent a robustly built woman, usually with dark hair and dark eyes and dark tan. Even if she isn't overweight she would probably seem to be slow and waddling in motions.

If you get the Queen of Pentacles as the card of the day or in daily divination it may refer to certain stability and security you've gained. It may also represent your attitude toward some event such patiently waiting for outcome and results. As your temporal mood, it may suggest your thoughts about organizing something, ordering, rearranging, making long-term plans, thinking over the realization of your tasks and similar things. You may get an idea how to make more financial income from a hobby, some kind of work from home, trough service activities or routine activities as additional jobs besides your main job.

If Queen of Pentacles starts appearing regularly in some period as a daily card or in daily reading, and you are sure it's not your significator, it may warn you that you are getting too inert or closed at home so you should start working on your activity. Pay attention if you notice some unwanted nutrition issues. More activity may improve your health, metabolism, lift your enthusiasm and general well-being. Having contact with nature and especially with the earth itself may make you grounded and increase your energy.

If you liked some of the features of Queen of Pentacles you can use this card as meditation card. It may raise your patience, and make you more practical and grounded if you feel yourself being too light, with the head in clouds or wearing pink glasses. At least being calculating and building up some imitating skills isn't so bad if you find out it may serve you some way. If you feel heavy, static, slow, inert or to grounded better avoid this meditation.