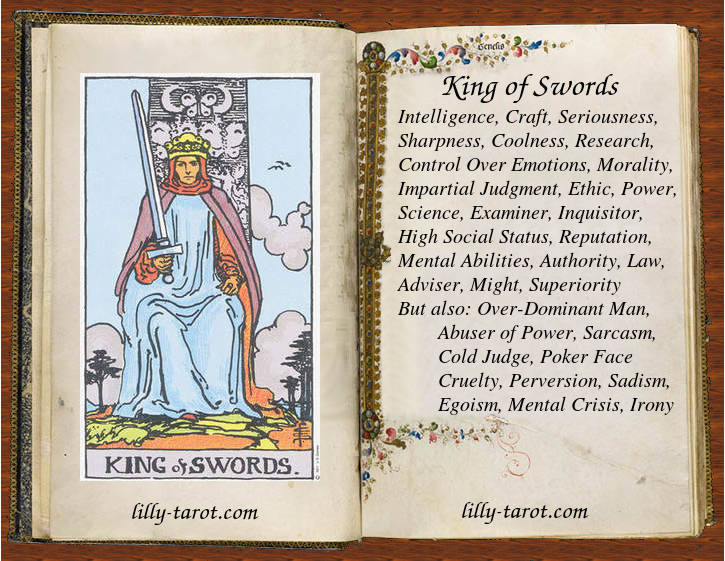 King of Swords as personal significator describes clever and intelligent man. He is studious with sense of impartial judgment. Fields of his interests are science, ethic, morality, law, order and research. He is interested in low and order on deep level - how the thing are functioning in the world, universe, among people and society. It includes low and order in social meaning, in a term of legal matters as well as in meaning of natural low and conditionality. So his professions could be very varied, from scientist in area of physics, mathematics, trough medicine or philosophy, to counselor, adviser, lawyer or judge. No matter what he chose, he tends to reach the highest position in chosen area so he could be found at the position of authority. Status and authority are very important to him, not only from a wealth reasons, he just wants to be on the top. He assumes he has to be on the top because of his intelligence, sharp mind, organizers abilities, deep concentration and focus on the core of the any matter, depending of his tasks. No doubt, there is a strong wish to be superior. If you are looking for him, you can find this type among professors, doctors, scientists, philosophers, politicians, ideologist, orators and so on. They are the people of ideas, big all-inclusive ideas, philosophies and ideologies which often turn into metaphysics. Beside their ratio and quick, sharp brain, they tend to be a way too much rational in the way that they become quite irrational in their rationality. This is the principle that extreme version of anything meets its opposite extreme end, which is in this case called "iron cage of rationality". Kings of Swords are usually very abstract in their thoughts and they really understand abstractions and tend to rationalize them and to put them down at more understandable level for others. Not rarely, they are misunderstood and their words are taken for granted and literal at the lowest level. They often speak in metaphors in order to make metaphysic closer to simplicity and vice versa, but it seems that is sometimes very hard to catch their point.

If somewhere appears some King of Sword that is arrogant and malicious, he will gladly abuse his mental superiority. In that case, he will intentionally act in way to be misunderstood and make himself look even more superior. Acting that way he is mastermind of mind games, still with a way much more tact than his "younger" relative Knight of Sword. King of Swords type of personality is more cool headed with more patience. Even if ironic and sarcastic he is a way more elegant than Knight of Sword type. So, it often happens that others discover his games too late, when they are already caught in his spider web. Then they realize that all the time while they were trying to understand his "majesty" and his smart words they were actually falling for his game and unknowing it, were playing his game by his rules and conditions. If for corrupted form of King of Cups I may say that he is emotional manipulator, corrupted form of King of Swords is mental manipulator and mastermind of mind games. He is capable of making others feel so dull and silly compared to him that they find themselves don't knowing how to parry him. He may enjoy it and be quite egocentric in his role of superior mastermind. In very negative expression he may suffer messianic complex and infatuate others just because he can. Even if he doesn't have any other interest he will always be interested in spreading his idea. As a man of idea he is very aware of its power. Ideas and notions rule the world and he knows that very well. The power is in hands of those who dispose of and spread the ideas.

Positive expression of King of Sword personality could be really positive. There you have quite serious person who is very moderate and reasonable. He is like a walking voice of reason. Usually highly educated, even if he isn't he is still intelligent, smart, cultured and well versed in literature and science. Because he likes to think he likes solving problems and finding solutions. He would gladly get into anything complicated and try to solve it. His wisdom and advice are of help. King of Sword is like beacon in the night in times of troubles and problems. His reason and wisdom are kind of enlightening. He can be good psychologist and psychoanalyst because his piercing mind goes deep to the root of the problem and he is able to lead other to understanding. For that reason, there are a lot of teachers and gurus of many kind among Kings of Swords. In positive form he is honest and willing to share his knowledge and experience.

Astrologically, King of Swords usually fits mature male representatives of Air zodiac signs - Aquarius, Libra and Gemini. I would relate him especially with the Aquarius type or those with dominant Aquarius sign. As fixed air sign, Aquarius is very mental, idealistic, impartial and neutral. It is the sign of humanism and great ideas. Of course, as it is already mentioned in previous texts, these correspondences are more like hints and they are not fixed exactly to specific astrological sign. They represents specific type of personality and sometimes specific period or time and like that they could be related to zodiac signs with similar characters.

As the card of the day, King of Sword may represent your role and reactions toward current events and issues. In that case, you will probably act cool-headed and thoughtful. After researching many ideas and options you will find the most proper solution and your assessment and judgment will probably be right and impartial. It may also refer to another person who is type of King of Sword and whose role in that moment is kind of problem-solver. No matter is it doctor or lawyer the point is the same. In daily divination, King of Sword may refer to some kind of authority or the one whose judgment you trust. Usually the cards around court cards describe closer to which court cards refer.