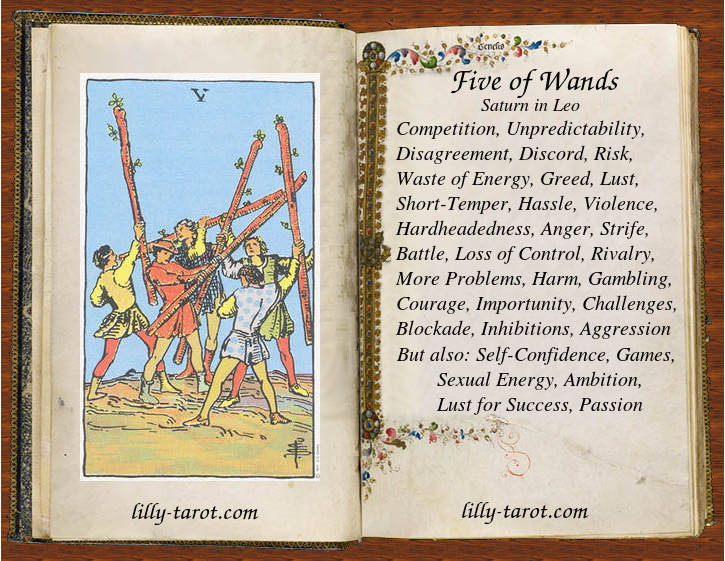 Five of Wands is one of ambiguous and multilayered cards. In many tarot deck it refers to competition, strife, aggression and discord. It is true, Five of Wands possess a large amount of aggressiveness and brings some troubles, but also has very positive meanings behind that. At the first place it is creativity and energy drive. If aggressiveness and hassle are well imposed this card may refer to fine success. Somehow, it brings some luck in not so lucky situation.

In Thoth deck Five of Wands is titled as strife. In Waite-Smith deck image of this card unequivocally describes fight between five young men. Depending of associations and other cards in spread it may seem like real and serious fight and conflict, each against each other, fight between two or more groups or clans and on the other side it may seem like a boyish game. Anyway it do refer to competition, but the competition could be friendly, sports, for fun or product of real conflict. No matter what, this card is packed with fierce energy. Even if it is about game and friendly competition, there is always present lust for success, victory and being the first and the best. Being the first and best means here being stronger, more courageous, more masculine and fiercer than others. Finally, this card precedes Six of wands, where is pictured proud victor who gains praises and admiration of masses. Behind that success there must be effort, bravery, determination, strong will for success and some piece of luck beside all.

Five of Wands isn't necessary physical fight or clash. It is rather about conflicts between two or more opposite wills and views when everyone involved strives to imposes his will. The one whose will is the strongest naturally becomes a leader and and gets into spotlight. It is also an ego-fight, because everyone involved tends to represents himself in best light and to impose the most exalted vision of himself. For this reason, Five of Wands is very masculine card and represents typical male energy and principle. It is competition about who is going to be an alpha-male. As an effect of that it comes naturally and becomes clear what refers to sexuality and sexual energy in Five of Wands and how does it come that card which at first sight refers to conflict and was titled strife has something with that.

Some of very unpopular meanings of this card are anger, ego, loss of self-control, rashness, conflicting behavior and so on, which obviously may bring a lot of trouble. Positive thing in this is that the subject isn't victim of circumstances, he is the one who is responsible. And accordingly to that, he has an option to change his position. Cool head and strategy are two most important things what he needs in order to get desired results.

Five of Wands gets it more violent and aggressive form in combination with similar sort of Swords such Five of Swords or Ten of Swords. With the Five of Swords it turns into "the end justifies the means" in its very dirty and bold form. The one is ready for anything just to get what he wants which include deceptions, lies and no fair-play. With the Ten of Swords the fight is subjected to failure and it could be related to physical violence. Combined with Seven of Swords it is school's example of back-stabbing, lies, deceit, viciousness, treason and hypocrisy in order to steal someone's credit and status. While with Five of Pentacles it may have very physical meaning in the matter of weakness, crisis of energy and physical health or losing the competition for much needed job and financial loss due gambling or hazard.

More favorable meaning of Five of Wands is success in competitive or dangerous sports, both as team player or single. It also shows an adrenaline addiction and hot temper. With good calculation and strategy it may bring great results. In any case, channeling energy of Five of Wands, if it repeats regularly, trough sport, dance, social games and similar activity is good choice.

Five of Wands is astrologically corresponded to first decan of sign Leo, ruled by Saturn. It is combination of hot and cold with a lot of dryness. Traditionally, Saturn has its exile in Leo as traditional daily ruler of Aquarius and participating ruler of fire triplicity. Saturn become less cold, static and calculating but still firm, determined, controlling, authoritative with tendencies toward dominance. So, this combination of very dominant sign and very dominant and power-lustful planet. Lust for power and dominance brings certain dose of fierceness and aggressiveness. If this energy is well channeled it may bring excellent sense of leadership and well calculated strategy which lead to success. This position is kind of similar and could be compared to political fight and ellections, as well as Five of Wands card. Think over that and you'll notice the point and similarities.

As the card of the day or in daily divination Five of Wands may suggest offensive attitude and conflict prone behavior, especially if it appears often and regularly in certain period. It points to ambition to prove yourself as the dominant one. Your will and lust for might and power may arise. It is very co-dependent on other cards in spread, in meaning are you the one who wants to impose his will or you are the one who oppose the other's with same tendencies. No matter what of those two cases, if you are involved in this game, even as the one who resist and oppose, it means that you also surely have certain dose of the same lust and that you accepted the game. Due that Saturn plays its role here, the winner is the one who lasts and endures for longer. This battle is primary about opposed wills and egos. The harder occasion is that is possible that you have more than one opponent, but the easier one is they all are opponents among each other. Using it in personal favor may be a part of well organized and calculated strategy. And in this case it is a really good tip to use discord among your opponents. This is kind of luck in very possibly disadvantageous situation. But have on mind the Seven of Wands... After you get to your throne - represented by Six of Wands, your opponents who were also opponents among each others, may unite their forces against you - the unfavorable situation of The Seven of Wands.

If you are female, especially pay attention if Five of Wands repeats often. It is filled with male energy and may mean that you haven't yet integrated well male energy inside of yourself. Aspect of your Animus or Martian energy. Five of Wands as other Fives is related to Sephira Geburah which is related to planet Mars as well. Strength and Severity are its main attributes, and Fire is its elemental force. If this energy isn't integrated and accepted, issues represented trough Five of Wands come as challenges which push you to become aware of that aspect you. No matter if you are a woman or girl, you naturally have some amount of this male energy expressed trough aggressiveness and self-assertion. Awakening, understanding and acceptance of this part of you may spare you from many troubles. At the same time, it may face you with your ambitions which you avoided to deal with.

Finally, Five of Wands, may speak about the conflict within yourself. It may suggest that there are no external opponents, adversary, rivals and opposing wills and attitudes, but that the conflict and all of mentioned here is going on within your inner self. Try to find out which parts of your being are acting as opposites and thus obstruct and sabotage your success, ambitions and keep you far from reaching your goals. Uniting them will bring needed strength and endurance. On the other hand, all external conflicts are supposed to mirror inner conflicts, so solving inner ones will effect solving external.