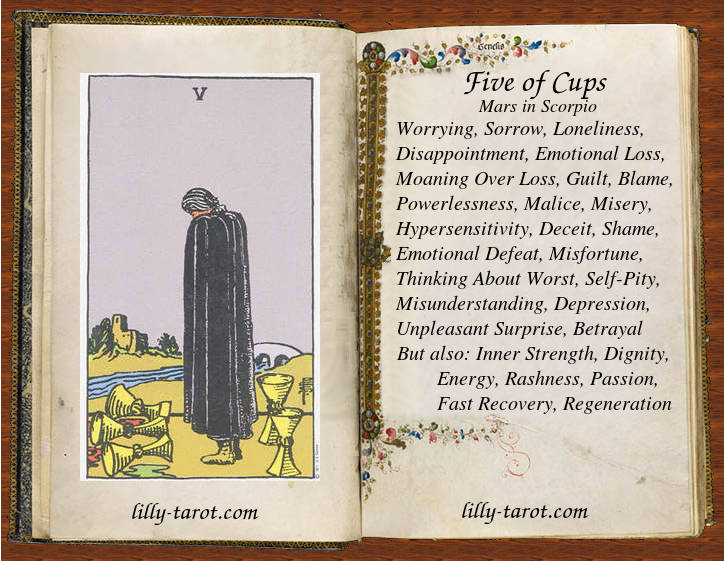 The phrase "Crying over spilled milk" may best describe Five of Cups. Bad thing happen and there ain't much we can do about it. No matter who is to blame, who "spilled milk", it's already done. Blaming yourself or someone else wouldn't be of much help, nether will sorrow and guilt. Keeping that in mind I must say that this is a card of deep sorrow and emotional pain. As the Cups are related both to emotions/feelings and spirituality as well, distress may be experienced not only as deep emotional pain but also as spiritual sadness, emptiness and void. Such experiences are there to tear off one from his comfort zone and shake him to the root.

Fives are known as destroyers of stability of Fours. While Fours represent tough and firm structure, Fifes represent impact of opposite destructive energy. In suit of wands Five of Wands represent rival's will, strife and interest opposite to those of subject, Fives of Pentacles disrupts financial, material and physical security which is Four of Pentacles focused to keep and protect. Five of Swords disturbs Four of Sword's piece of mind. Finally, Five of Cups brings turmoil into emotional and spiritual sphere and security, thus it brakes up lethargy and and dreamy state of Four of Cups. Four of Cups is quite passive and waters in cups become stagnant. With the Five waters starts decaying at first stage but also get an impulse which leads to move.

In Waite-Smith deck hunched person is looking at three spilled cups while two cups are standing behind of him. He obviously looks sad and despondent. What we can't know from image is are two upstanding cups filled or empty and who throws three cups - he, someone else, or did they just fall. If he thrown them, was it from rage, anger, disappointment or by accident. Those questions stay open to interpreters. At the image of Four of Cups, there are three standing Cups, while fourth one appears from thin air. There, we also don't know is the fourth cup is just imagination of man who is sitting under the tree or is it a gift and offer to him which he, sunk in his thought, doesn't see. Are three spilled cups from the Five of Cups the same three cups from the image of Four of Cups?

Anyway, Five of Cups tells us about loss and regret over that what is lost, no matter is it by fault of subject of reading or someone else. It shows self-guilt, self-pity, disappointment and sorrow. The person is turned to past and can't let it go. He is still living in that moment when loss has happened, while he has an opportunity to turn over his head and walk away and save what could be saved and what is left. It is illustration of phase "facing the bitter truth and learning to accept it". Reactions toward this are varying, the querent may experience shock, freezing, difficulty to react properly, rage, anger, losing control over emotions and self at all, deep hurt and pain, paralysis, breakdown... Any reaction is always better than not reacting or simply refraining. Trough reaction, whatever it could be, one is leaving this state faster.

Five of Cups is astrologically related to first decan of sign of Scorpio ruled by planet Mars. Mars here, at this placement, is supposed to be very potent because he is, beside rulership of first decan, traditional ruler of Scorpio. Water Mars, Mars in any of water sign, suggests that emotions strongly effect the actions and will of person with this positions. Even Mars is here in his familiar sign, in his triplicity (by Ptolomy and Lilly, not others) and decan, it can't be said that his expression here is positive. In Scorpio, Mars represents destructive force contrary to constructive and pioneering spirit such as in Aries. His influence here is pointed to decaying, ruin and annihilation of existing and constructed. If Mars Aries suggests the beginning, Mars in Scorpio suggests is the end. The end of an life stage, relationship, friendship, loss of something the querant is emotional attached. In that meaning this card is kind of similar to Major Arcana Death, thought not so radical. Similarly as the Death, it represents the end of something which leaves the open space for the beginning of something new.

As the card of the day, Five of Cups may face you with your weak spots, especially in the sphere of emotional, feelings and spirituality. It doesn't necessary represent emotional loss but surely points to strong emotional reaction towards any issue. So you may experience the feeling of deprivation and unfairly estranging something important to you. This card suggests you to take your time as much as you need to consolidate with new circumstances. When you feel you are ready, let the past go. Don't turn your head back, what it's done it is done. There is nothing left behind for you to looking for. Walk your way, carry with you what is left and go forward. Current disappointment could be used as driving and creative force for new beginning and something even better.

Five of Cups is usually related to being left by your partner, partner's betrayal or cheating, or feeling betrayal by any dear person who is significant for you. Being hurt or betrayed by anyone who doesn't mean so much to you can't hurt that bad and bring that feeling of misery and misfortune. But being disappointed by someone close, important, loved one, yes, it is a big deal. Passing trough all stages of facing that issue you can finally realize that someone wasn't worth of you affection and love. Even when sorrow leaves you there still might remain feeling that you lost your time or invested your energy and love in something that ended poorly. But you can't get the time back nor change the past no matter how much you are looking into it. As fast you accept, as fast new opportunity will come. Sharper you cut the cord with past better will be new experience. Decision is up to you, will you let the past spoil something new which could be better or cut the cord, regenerate and jump fresh into new experience.

The message of Five of Cups resonates with philosophical truth that everything is predetermined to die and come to it's end. There is nothing to do about it. The only possible thing is acceptance and letting go. At least, something must die in order to bring beginning of something new and fresh. Clinging and attaching to the past may block regenerative and renewal energy. Even worse, by clinging to the past you destroy your own chance for something better. If something came to its end it means it had to be ended, whether it wasn't good enough or it doesn't serve you anymore. So, why would you limit yourself by keeping connection to that instead of looking forward.