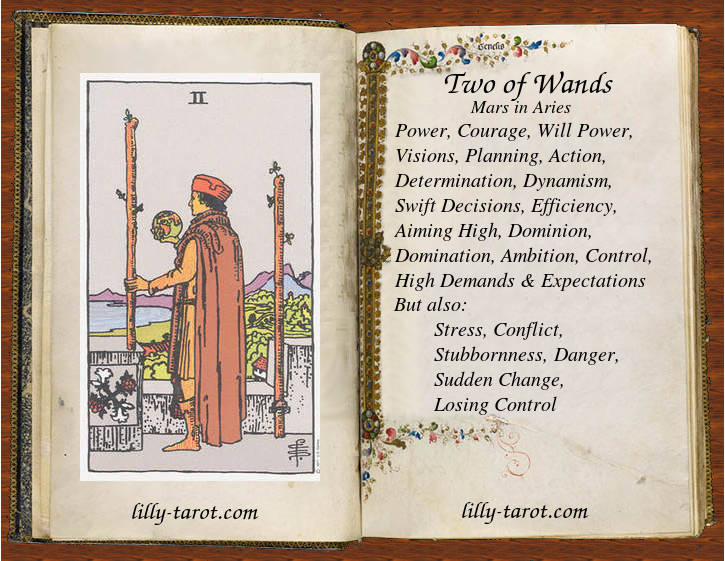 Here we deal with the card of action, will power and domination. After Ace, which represent initiation and oneness, two is the first division. All of four twos are dualistic in their nature. In the matter of wands, dualism is about energy and will power. After initial action, Two of Wands represent division of energy, which could have its positive and negative side.

Two of wands is related to first decan of Aries ruled by Mars. Mars, as a ruler planet of sign Aries, at this position, within the first ten degree, is very potent. All Mars'es features are expressed in full potential here. Both, Mars as planet and Aries as a sign, are about to action, energy, will power, breaking through and conquering. Knowing how Mars and Aries act, it becomes to to be very clear and simple to understand what Two of Wands refers to. Sudden actions and decisions are something very familiar to both of them, the same as being the first, "number one", dominant, the one who acts on his own, the one who leads no matter if there anyone is to follow.

As a person, this is planner. The one with vision who can't wait to start a mission. It is a brave personality very passionate about his projects, whatever they are. The goals are set high and his way is straight forward. This one will not settle down until he reach what he want. Often, this character seems to be strenuous, hardheaded and too demanding ignoring other's needs. He easily gets into conflict tending to impose his will.

Beside good strategy and plans, sudden actions may be followed with many difficulties and cause a lot of stress. Too high ambitions may lead into taking too much tasks on yourself. If the goals are set just to be achieved it means there always will be the next "must do" thing. Due to taking too much tasks there is a risk of waste of energy and talents. If the field of action is wide it implies distribution of forces.

Drawn out as a daily card, Two of Wands may refer that you are in phase of planning an action how to do something in most efficient way. Now you can see the big picture and want to involve. Your will power arise and you are capable to turn visions into reality. It also may mean that you have a hard time with some stubborn person, that someone is so demanding toward you or vice versa. Conflict of opposite wills is present and the one who is more determined will win. But pay attention what is the price of this victory and make sure that is not just mere waste of time.

This is a time to check over your motives. Are the goals there just to be achieved or they have meaningful purpose? Thinking over the quote "the end justifies the means" won't hurt. Where does your ambition lead you to? Two of Wands suggests making strategy and distribution of personal forces before getting into action to prevent possibility of loss and losing control over situation.