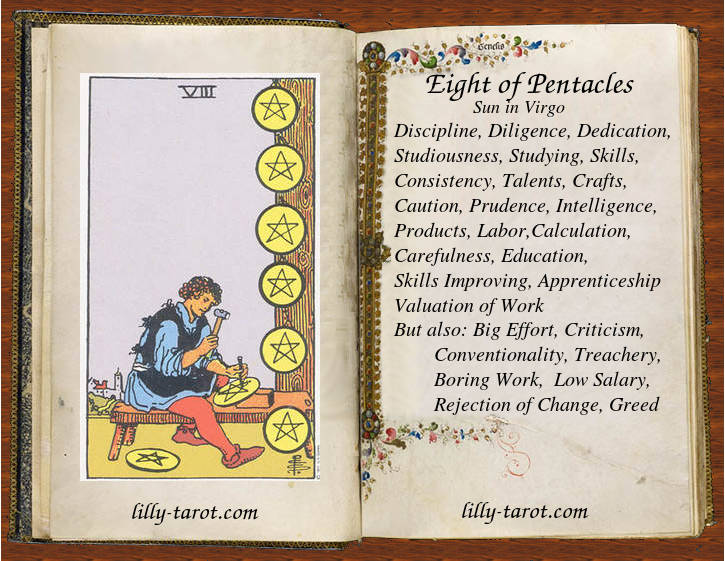 The Eight of Pentacles is a card of constant and dedicated work. Concentration is put on at work itself, not to the shortcuts. It represent the will for learning something new and more. The word is here about perfecting of skills and crafts which this card relates to apprenticeship. The knowledge is low at the start but trough persistent work and consistency it become greater, till it riches perfection.

The personality represented by Eight of Pentacles, beside already mentioned, pays a lot of attention to details. He would like any product of his work to be perfect and precious. As a perfectionist, he won't left anything half-done. He will work on his subject until he can consider it as correctly finished. Also, this person is very susceptible to criticism or comparison with others. He knows that he gave his best and will not accept criticism to his account. The negative feature here could be conceit and criticism toward others and their abilities and skills. Thinking that he knows the best and that nobody else is able to do something good enough, may lead him to refuse a help when it's obviously needed. So another relation to this card is working alone along with taking on too many tasks for yourself.

The Eight of Pentacles is related to first decan of Virgo ruled by Sun. Virgos are known as good workers, students and diligent people, but also as perfectionists, pedants and critical, even petty. With the Sun in Virgo, especially within first ten degrees, the person proves himself trough performing tasks. He values others per their capacity for hard work. Features such conventionality, efficiency, foresight and discretion are appreciated. Frequently, Eight of Pentacles allude to self-employment.

As card of the day, Eight of Pentacles may signify specialization of certain skills and upgrading of abilities. Maybe you decide to take some course or continue studies. This is also a good day for money redistribution and making calculations in trading. If you decide to take a risks make sure they are well calculated. It is favorable period for making lower but stable profit.

Eight of Pentacles, as a daily card, suggests you to be persistent in your activities and stay consistent to your goals. Invested effort and resources will be paid out. This is a positive card for material and business sphere which promises success. Pay attention not to be too ambitious and get into unplanned situation.

The message of Eight of Pentacles is: Carefully planned activities are key of success. Practicing makes you perfect. Dedication to your plans and intentions will brings the results. Take care not get lost into details and thus failing to observe the whole picture.