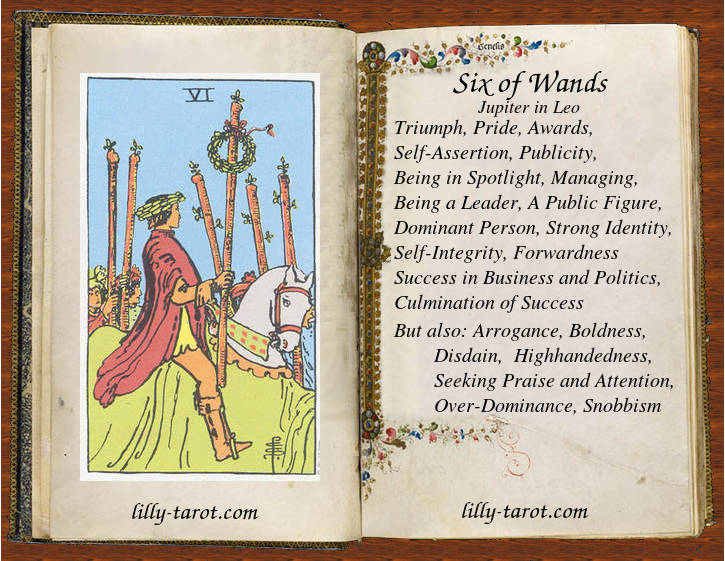 Six of wands is card of victory. Victory has many faces and forms, from very physical meaning to more subtle. No matter what, this triumph must be seen, admired and glorified. It is associated to the second decan of Leo which is ruled Jupiter. Here we have expansive Jupiter combined with natural born king Leo. Leo's features are very accented and extended with Jupiter, even exaggeratedly. This is a picture of king on his throne or proud winner adored by many who is very aware of his dignity and popularity.

As a personality this is a type who will gladly accept challenges to prove himself as irreplaceable. Self-assertive attitude is present in private and personal sphere. The life is seen as game with winners and losers, with those who follow and those who are followed. The victory promises glory, acknowledgment and prizes. Any trophies are very welcome. If in reading this card appoint to a certain person, this is a person who feel very comfortable in his role. He likes to in the spotlight of the stage and his stage could be anywhere where is an audience. This could be a public personality or the one who is famous in his environment.

This card refers to success in any sphere of life about which is question. The success might be bigger than expected. This is also the second stage of completion, as the Three of Wands was the first. Six of Wands refers that the position is well established and stronger than in previous phase.

The negative side of Six of Wands is getting too lost in a playing role. Arrogance may easy take a place instead of generosity and personal integrity may overgrow into disdain. Tendency to be over dominant may make a lot of enemies. So this card also warns not to take success and popularity for granted and get intoxicated by success. Also not to get drown into false ego.

If you draw Six of Wands as a daily card it is telling you that your five minutes have come. This is your time to shine in all its glory and to take this role as a master. Make sure to know when it's time to step on the stage and when to step down. It is far better to get remembered in your best light, no matter how long it will last, than to stay longer and leave impression of seeking attention. Give your best and expect nothing less than grandiosity. This card teaches you of self-valuing and being proud of yourself. Don't underestimate yourself and accept what you are given.

Meditating on this card may help you to encourage yourself before any important event such job interview, public speaking or any other event where you will be in center of attention and want to do your best. It may little by little rise your awareness about your importance in you environment. Changing your attitude toward yourself will change someone else attitude toward you too.