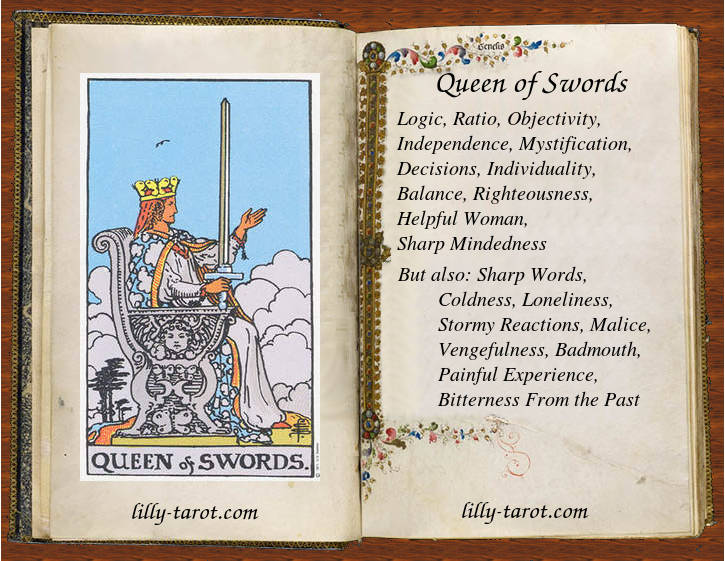 Queen of swords, as a court card, usually represents certain person or character. It may refer to your attitude toward certain situation which question is about. As person it is usually mature woman, clever and serious about her actions and deeds. She is rational, sometimes even too sharp, cold and distant. However, she might be great problem solver with her intelligence and huge experience. This woman's life probably was turbulent, with many highs and lows and very bitter experiences so she had learn to put up with that. The life learned her how to mobilize all her intelligence and knowledge and turn off emotions. So she may seem to be unemotional, cold and disconnected for other's outbursts but she is not the one who won't help if she can.

The other side of her personality is if she is full of bitterness and prone to vindictive behavior. If she decides to be mean she will probably be without hesitation, the best she is able. Then she will put her skills into operation to do as much harm as she can. This Queen is unmerciful for those who deserve to taste her sword. Her tongue is equally sharp as her sword, and brain too. But she would rather observe people around than talk a lot and reveal her secret weapons. She keeps it as trump when the moment comes to defeat her opponent. Thus, she is secretive personality. She is the most secretive about her past though she is usually open. Just a few she estimates to deserve her trust know her secrets. Her past is very often splotchy in some way.

Not rarely the woman represented as Queen of Swords is widowed or divorced. She may also not accept marriage and sees it as institutionalized means for women's deprivation of their freedom. So here it is her feminist aspect and in my opinion the feminist movements fits symbolism of Queen of Swords along with movements for women's rights, right to vote, rights in professional sphere and so on. In this respect, she represent untraditional type of woman.

As a daily card Queen of swords may lead you to think about your education, self-employment, legal issues and how to use personal and available resources in order to overcome an unenviable situation you are stuck in. She teaches you how to be your best friend and that only person you can always count on is just you. Self-advancement is one of the most precious things you may do for yourself.