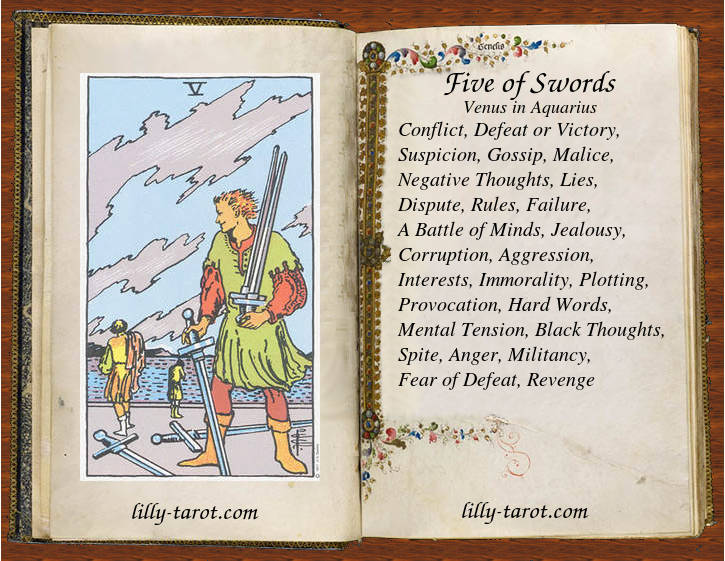 Five of Swords is card of loss and defeat. All of four fives are about disturbance, destruction and disintegration. As the swords are connected with air this is disturbance on mental and verbal level. The thoughts are about struggling and troubles. Five of Swords usually manifests as endless conflict about who or what is right. The one is ready to to defend his point of view and is going against everything even if he knows it is lost battle. Five of Swords is filled with certain doze of fatalism. Fatalistic views here have nothing to do with apologetic mind, this is more rebellious form of fatalism. The person plays on all or nothing and goes against fate and circumstances knowing that nothing is in his favor. Investing all his effort to win the battle the one is slightly losing his compass of morality, what is just and what is not. Finally, he may find himself too hard on others and himself as well. As he is getting exhausted in his striving for self-approval he becomes more sarcastic, biting, petty, inconvenient even cunning and treacherous. He doesn't hesitate on manipulation, intimidation, threats or blackmailing. There is whole range of undercover plans for revenge and defeating of enemy.

This card is associated with Venus in Aquarius, videlicet the first decan of Aquarius ruled by Venus. At the first sight, it seems very strange that swaying and fluffy Venus, as planet of beauty, love and harmony in human airy Aquarius may make such bitter combination like Five of Swords. But, obviously, emotional and love seeking Venus doesn't feel comfortable in sharp-minded Aquarius. Usually known as lighthearted and amusing Aquarius, as everything else has also an another face. And Venus has too. So the Aquarius might be quite rebellious, hardheaded, self-sufficient and strange lone wolf which are not Venus'es fields. Aquariuses may slightly turn from amusing trough comical and to droll with their tendency to be eccentric and gaining attention and loses all Venusian manners and elegance. Venus, without publicity and adoring becomes a lonely Ice Queen in cold Aquarius. All the bitterness, outer and inner conflicts come out as a result of disharmony of ratio and emotions. So our beauty Queen becomes cunning, cruel, unfeeling and freakish.

Actually, logical and sharp Swords don't want to deal with too much sensitivity. Intelligent, as they are, they will give as much effort as possible to investigate what is going on and put a ratio above everything else. But, simply if something is not in domain of logic that makes them frustrated. In such circumstances they are losing battles, beside the all of rational arguments and intelligence. Feeling intellectually superior they won't let go so easy, they will enforce all their brain powers to get what they want, not hesitating mean words and deeds. They will try to win that battle even if that means losing the war.

It's hard to say that Five of Swords is dishonest, it is just as it is. Becoming psychotic fatalist in order to prove that he is right and honest may make a fatal damage. The one who is signified by Five of Sword, hurts the other one because he is feeling hurt. Finally, even if he wins his fight for right he'll still feel hurt.

Five of swords leads to thoughts about revenge and what is the price of that. The one who wears sharp weapon may as well fall onto his own weapon. Finally, when you defeat everyone and get even for everything, you may find yourself standing alone with only blood on your hands and victory left. But there is nobody else left to glorify your victory. This card awakes associations of Pyrrhic victory, after which King Pyrrhus said 'Another such victory and I am undone".