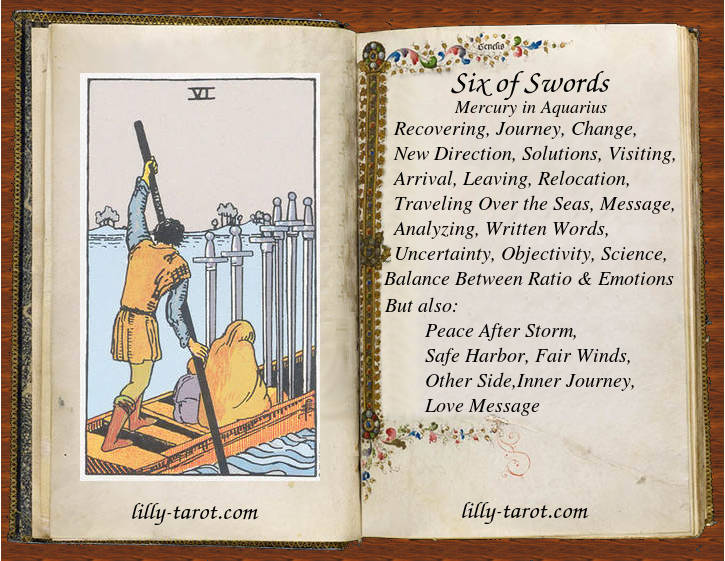 Six of swords is unspecified about positive or negative state and result. This is not the one which appoints exalted mood, high energy level and fullness nor to depths of depression and disasters. This is more likely moving on forward, from ill to better. Six of swords, similarly to other sixes, is about returning state of harmony and peace after challenging moments. It brings recovery, restoration, restoring hope and gives green light for movement.

Even in hard times, Six of Swords reminds you that you have someone of something you may count on. Someone who is compassionate and is willing to support you.

As it's connected to rationality, analyzing and objectivity, Six of Swords refers to learning from past experience and not giving in into sorrow. Wherever you go carry your knowledge and experience with you. Some of them weren't so pleasant but they are not here to regret over them but to learn you how to avoid them next time.

Mercury in Aquarius is related to Six of Swords which gives it pretty airy characteristics. It is very positive for mental activities, science, studying, writing, verbal expression and clarity of thoughts. It may lead you to rational and objective perceiving yourself. From that side, it is an inner journey where you going to discover an island of safety in the middle of the vast expanse of water. That island is your steadfast and safe harbor when the wild winds blow.

Six of Swords awakes a reference to ferryman of Hades, Charon, who carries souls across the rivers of Hades that divides the world of the living from the world of the dead. Five rivers are Styx - river of the oaths, Acheron - river of woe, Phlegethon - a stream of fire, Cocytus - the river of wailing and Lethe - the river of oblivion. Five rivers converge at the center of the underworld, on a great marsh, which often, is also called the Styx. Symbolically, it refers to going trough your personal underworld, meeting your shadow and face to it.

Another symbolical meaning is crossing over the rivers leading you to make a vow with yourself: to forget what was in the past and accept the new things coming, leaving grief and sorrow behind, stop wailing and regret over the past because you survived baptism of fire.