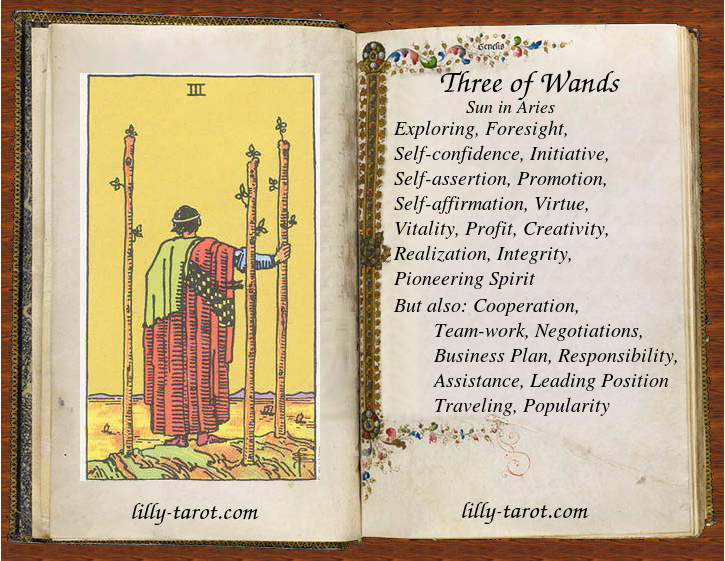 Three of Wands is in co-relation with second decan of Aries which is ruled by Sun. Aries is the sign of Sun's exaltation which is between 18th and 19th degree, also in the 2nd decan. It is obvious that Sun is the most potent at that position, near the degree of exaltation, in second decan. Consequently, Three of Wands has very Solar nature and includes most of Sun's attributions.

This card refers to leading and conquering. This is a brave journey to unknown distant lands, but with full awareness of each step. It is about courage, discipline, expansion and pioneering spirit packed together. The one has clear idea of what and how to perform his mission. Here is a strong sense of duty and responsibility as well as sense of being representative and taking the main role.

The journey may be literally physical or metaphysical. It is also spirit and soul journey where subject discovers himself and tests his limits. Astral traveling, astral, ethereal and mental projection are all pictured at this card. If you see yourself as an aspirant you may try to meditate on Three of Wands to fix your intention to wanted result. If you are not attracted to idea of going that far you can use this for foresight and to widen your views.

In every day practice meditation or visualization of Three of Wands could strengthen your Solar attributions mentioned above such leadership, self-integrity, establishment of new ideas and clarification of old ones, self-expression or could help turning hobby into business.