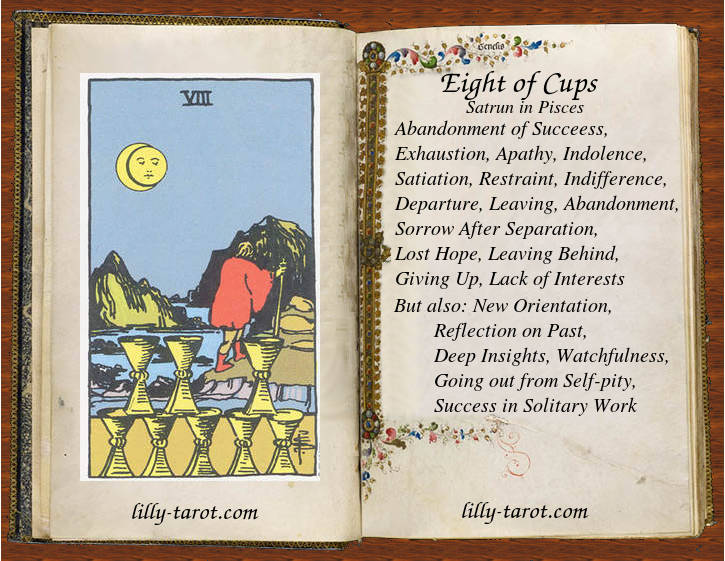 Nothing is as tragic as it looks at first sight. This card reflects more on inner, subjective state than objective and outer issues. Maybe best description of Eight of Cups is feeling drained after so much expectations, indulgence and involvoing. As everything goes on in cycles this melancholy is nothing more than temporary state. And the lesion of this cycle should be learning to say no and enough and how to disconnect from current affairs.

Eight of Cups always seemed to me as lower octave of The Hermit. Someone is alone, in ascetic mood, relinquishing the material and worldly pleasures for the sake of something higher, or at least different. He is aware of his decision to leave, nothing forced him to do that.

This card denotes need for introspection and reflection on the past. What is achieved and what was wanted? Where does it lead you further? Does it bring satisfaction? What was invested and what did it return? Is there something which should be left behind?

It's time to overcome the past disappointment, rest and move on forward. The decision is yours where do you want to go next. Spend some time in private and listen to your inner voice. If it's about an insurmountable emotional problem, support of therapist or trustworthy woman, especially the blond one, should be helpful.