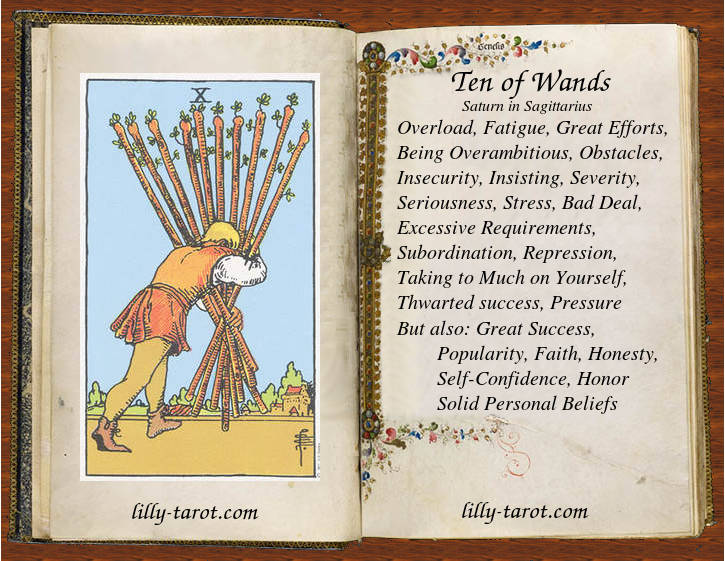 Ten of Wands is the card of hardworking and investing great effort but missing the appropriate reward. Final gain and success are not in proportion with invested efforts and talents. Ambition and will to do a lot are strong but followed by taking on too much and being overburdened. Ten of Wands could also be called a card of thwarted or reduced success.

In Thoth Tarot, Ten of Wands is named Oppression. This title resonate with the description from above but also suggest to existing subject and object of oppression. There is a one who oppresses the other and other who is oppressed. So it points to two-way relations, between subject and object of oppression. In that manner the who is oppressed isn't just a victim of his own ambition. It rather refers to example of person who works hard for his boss for low reward and poor pay.

Otherwise, Ten of Wands may refers simply to physical fatigue and exhaustion. Wands are dealing with energy and in that manner could be seen quite physical. Being overloaded and overburdened also could be observed very literally and physically.

Third decan of Sagittarius sign is related to Ten of Wands and has Saturn as decan ruler. Sagittarius is fiery, mutable sign with Jupiterian nature, Jupiter is the ruler of the whole sign. Jupiter is a planet of expansion, growth and good fortune which projects its features on the whole sign. While the Saturn is kinda different in his nature. Saturn sums up, reduces and decreases. It gives a form and due to that gives certain restriction, limitations and pressure. From this short astrological introduction, it is obvious that Sagittarius and Saturn are very different by their nature and they don't fit each other very positively. The field where they fit each other is ambition. Both Saturn and Jupiter are related to ambition, with one difference - while Jupiter could be quite easy-going, optimistic, funny and full of faith in personal abilities and success, Saturn is more quiet, hardworking, determined and skeptical about everything and everyone.

Considering astrological correspondences from above, it's getting clearer that Ten of Wands has a lot with ambitiousness and determinations to achievement. Because of optimistic and over-confident vision one takes a lot on his back ready to make new brilliant score but final realization is feeling of being under pressure while obstacles and tasks take control. That what used to be under control of the subject seems to turn against him. Hand in hand with it goes feeling of limitation and repression. As obstacles grows the more effort is expected to maintain at least a status quo and minimum of order which makes our subject tired, exhausted and what is most important unsatisfied. When invested effort crosses over the certain line then any result seems to be unsatisfactory and inappropriate in comparison to invested. There is also a tendency to envy toward others success, especially if the other one walked the easier way and won the price. Thereby even worse, if it seems that the other got what he wanted as piece of blind luck!

Not to be all black or white, Ten of Wands also refers to great dedication and almost impeccable and unshakable will power. The one will be a winner or decedent, I mean metaphorically, of course. So their dedication and strength of spirit ain't to be underestimated. Ten of Wands is also the card of honor, because the one is ready to go to the final frontier. Not to forget to mention honesty... Those who have experienced the influence of Ten of Wands experienced also unfair and injust battle so they pay a lot and stick to honesty as they stick to their personal believes.

If you pull out the Ten of Wands as the card of the day make sure that you check does the price fit the effort. Is your commitment worthy of final outcome? Calculate, how much you have given and how you've been gotten. Think over the ideas do you force yourself to the limits of endurance and are you near to become the victim or personal ambitions. Does someone else exploit your virtue and talents for his own success or do you have demanding personalities in you environment who make you feel being under pressure? Maybe the time has come to say No if you found yourself in the unenviable position.

It may also refer that you are physically tired and exhausted due to testing your limits, so take a rest and charge your batteries for the next feat and great achievement. Due that here is the word about the Ten, it means that it's the and of one cycle and preparation for the new one. So you should rest and summarize the previous experience and prepare fresh for the new ones.

Have a good night and sweet rest!