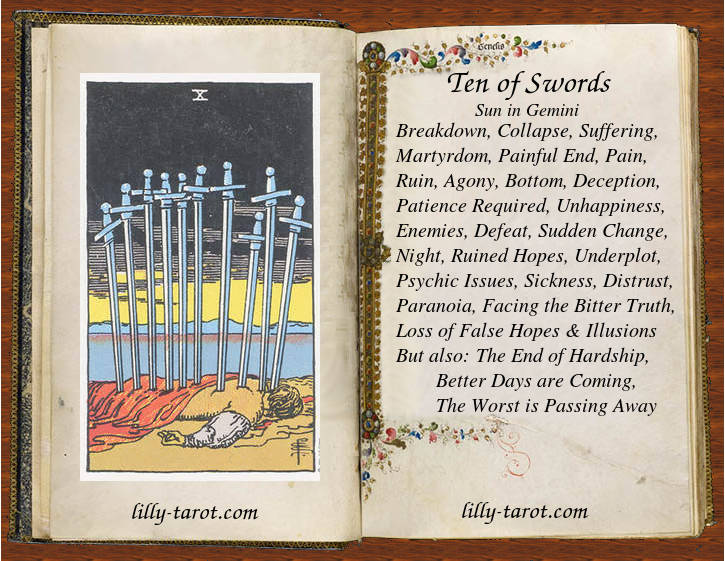 Ten of Swords is the card deepest bottom, total ruin and crush. One good thing about Ten of Swords is that that there is no worse after that. The bottom has been touched and the worst has already happened so after that there is only way out, if you survive this disaster. Of course, you will survive. It just seems to be such dreadful and exhausting experience but what didn't kill you may only makes you stronger. I don't want to say that Ten of Swords is a joke, but as it is about the swords which are related to the mind and thinking process, situation represented by Ten of Swords is often perceived worse than it really is. It is followed by heavy thoughts about the worst scenario one could imagine. It will pull out on the surface the most terrible and awful visions of the subject and face him up with his own deepest frustration. It could be a good practice to examine all these terrible thoughts and visions, trying to be logical and rational in order to find out what is causing them. Is it reality or rather one's own projections.

It is interesting how the swords show us how badly our own thoughts may effect us. The swords are dealing with ideas, thoughts and mental processes. Every idea born on mental plain deeply effects our emotions and our perceptions of reality. Every thought we clinch to effects further mental processes. Staying longer in negative thought pattern may really effect farther the whole spectrum of thoughts, emotions and physical state. We all know how it could be exhausting even for physical body.

As the swords represent active/male principle they are followed by certain dose of aggression which is very obvious as suit of swords has most of negative cards. Active character of swords leads to idea that usually our actions leads us to those state which swords represent. Thus those actions don't need to be materialized, rather they are based on thoughts and verbal plane, but they are still actions. Thinking process is active deed but usually isn't perceived in that way. So the card Ten of Swords often represent situation when one is rushing into own destruction and ruin. This card has self-destructive character. As much the person is aware of own self-destructiveness there are more chances to avoid poor outcome.

This is the final card in suits of swords and such that it represent the sum of previous. Persistence in acts which are represented by previous swords cards face it's outcome in Ten of Swords. Almost all of the swords pip cards have that specific self-destructive character and dose of fanaticism to force something which is often obvious to be nothing more than doing harm to your own self. Fighting the already lost battle is just waste of time and energy which may cause more frustration than just accepting things as they are and move forward. Who didn't learn it in the easier way will learn it hard way. And that is the Ten of Swords. Facing the total downfall, being nailed-up to the bottom with broken hopes and illusions, crushed ego and pride is that harder way. I don't even need to mention the states which follow it all, such deep depression, anxiety, paranoia, suspicion that the better days will ever come again, that the exit exists and so on. Crawling down on the floor, totally broken, without a power to say any more word, without a voice, even without a tears, completely numb, catatonic and cataleptic with only few feelings - deep pain, emptiness and void is the state of Ten of Swords.

Astrological correspondence for Ten of Swords is the third decan of the sign of Gemini ruled by the Sun. At the first sight this correspondence seems to be lame due the fact that Gemini as sign are not related to such dark and painful experience which Ten of Swords represents. But having in mind that the Gemini as air and mutable sign ruled by Mercury is very related to mental processes and thoughts, makes open space for Ten of Swords scenario. Sun related to ego, self-expressiveness, personal integrity and vitality, among others features, finds its expression here trough mental and verbal activity which become inseparable parts on which earlier listed features are based. It explains how much restlessness of the mind and negative thought patterns could be deadly. It also refers to hypocrisy, collusion and backstabbing which are some of the ways of expressing deviant intelligence.

If you get the Ten of Swords as the card of the day it doesn't necessary mean that your day will be ruined. And don't let it to destroy your mood. It may infer that it's time to re-examine your motives and where they are leading you. If you think that some actions may be destructive for you, it's better to interrupt them on time. Thinking over about your personal views of what is the worst scenario in your opinion, what frightens you most and what is most dreadful and threatening for you may lead you to answer why.

If you really feel you have touched the bottom in the manner of Ten of Swords I can only tell you be patient. If I tell you think logical or be rational it can't help a lot because we are all always rational in our opinion. On the other hand, it's hard to have clear criterion of what is rational and logical in the state when everything seems to go down and whole world crushes on your back. The blackest thoughts then seem to be most rational observing from that state. But, at least don't overwhelm yourself with all kinds of trash at this moment. Face the truth and accept your mistakes if they are there, but don't blame and torture yourself for everything what have went wrong. Bad things happen sometimes and that's it. After the storm the Sun is coming. At least, if your situation is represented by Ten of Swords be sure that it is the bottom line, after that only better things may come.