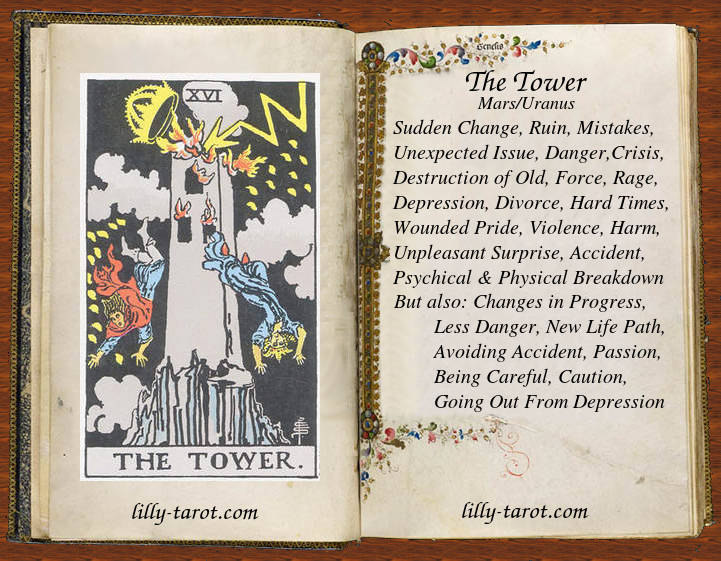 Surprise! We have a Tower on menu for today! Not so pleasant but it's still surprise. The Tower has bad reputation and that is certainly for reason, thus after all disruptions it may appear as positive. It is 16th Major Arcana which is usually related to destruction, sudden and unpleasant changes, unsafety and crisis of all kinds.

Similarly as others Major Arcanas I will observe The Tower as one of primal archetype forms. Looking form that perspective it could be also seen as fearful attitude of human kind toward big changes, which usually seem to destructive. Creation is followed by destruction and vice versa in both broader and narrow sense. Everything in the world is susceptible to change and this is the only unchangeable thing. Nothing lasts forever and we are all aware of it but still none of us like to be kicked out from the comfort zone. And beside, behind and beyond all meanings, The Tower is exactly that, being rough kicked our from the comfort zone and thrown to the fire. More resistance we give and reject the unavoidable more rough we will be kicked. And that's another unavoidable thing about The Tower. Less resistance and more accommodation and acceptance of changes may ease the pressure and stress caused by this necessity.

The Tower primary represents the principle of destruction in order to allow new creation. Something must be destroyed and burned to the root like it never was and have never been to make a place for something new to be born. For that reason, the Tower reminds me of the Phoenix which is born again and again from his own ash. The lesion of the Phoenix could be applied to The Tower experience as well as to the Death tarot card. Accepting changes and personal destruction to be born again and renewed. Knowing that change is unavoidable it's way far better to go with the flow and accept the necessity of transformation.

Quite good amount of these personal changes are related to the ego. If the ego would be represented as The Tower, the hard and tough structure and yet so fragile and susceptible to changes the things are getting clearer. As the towers on the fortresses were built for protection from the enemy's attack the ego is built from the same reason. Once the tower is fallen the whole fortress is in danger, and chances are great that whole fortress is at the hand of the attacker. Once the ego gets deeply threatened the whole personality feels unsafe and insecure. As much as identification with the ego is strong as much the breakdown is going to be strong. That may cause the real stroke, metaphorically and literally. Not rarely, it is followed with real crisis of identity and feeling of being lost and caught in the void of madness. Shaken pride and rocked personal integrity are usually perceived as complete destruction of personality at mental, emotional and even physical plane. Not rare, it is followed by deep depressions and psychosis, self-destructive behavior which only does more harm and many other disorders. To prevent this catastrophe the only way is to be aware of the next: higher the personal "tower" of the ego, especially if bloated and based on empty foundation s, more stress downfall will bring. Research and modification of all what is not based on strong foundation is the cure.

The Tower is usually related to the planet Mars, which represent war, attack, energy and force. As lesser malefic (Saturn is the greater one) it announces stress, restlessness and spending a lot of energy. He is aggressive and working fast and energetic. But the Mars isn't so related to such disasters and sudden changes. He is way more related to raw and brutal force. Disasters and sudden changes are more in accordance with Uranus along with unexpected and stormy issues. Uranus is not that clearly declared as malefic such Mars and Saturn are, but as transcendent one his energy is a way out of the personal control and will. Furthermore, many astrologers counts transcendent (outer) planets - Uranus, Neptune and Pluto as maleficent exactly because of their influences which are beyond willing control and understanding. Channeling their requires more effort and self-work. So Uranus is the other planet related to The Tower and some readers count Uranus as planetary correspondent of The Tower indeed. Personally, I agree with that view. If The Fool may represent lighter and happy-go-lucky side of Uranus, The Tower is definitely candidate for his more radical side and effects. Anyway, the Uranus is the one which is astrologically opposite to the Sun which represent ego, personality and self-integrity. Symbolically, Uranus represents the bolt of lightning and thunder which are pictured on most of The Tower's versions in various decks. Also, Uranus is the one which breaks Saturn's hard and firm structure and form, law, order and tradition and the Tower by itself symbolically represents all of those Saturn features. While Saturn is rigid Uranus is radical, but both are without a mercy. Passing safely and less stormy trough Uranus'es temptations and challenges requires accepting changes and furthermore willingly choosing to go trough them instead waiting for them to hunt you. So, I may say that the Tower is complex and multiplex mix of Mars, Saturn and Uranus, three malefics.

The lighter side of The Tower are liberation and release. Leaving old forms and concepts which don't serve well anymore, changing way of thinking or releasing from imposed forms of behavior could be really seen and experienced as liberation. As this is usually followed by new ideas, concepts and feeling of freedom the whole new world of chances and opportunity become visible. That kind of experience could be perceived and experienced as enlightening. As a daily card or in daily readings, The Tower may announce all what is already mentioned above including events such changing place of residence or work, outburst, nervousness, anxiety, mental tension and so on. Even such states may appear to be for no relevant and visible reason, the reason certainly exist and is hidden there where are hidden all fears, doubts, uncertainty and insecurity. Those shakes could be followed by physical manifestation such temperature and inflammation as they are related to heat and dry feature of fire element. Of course, they are also sudden and come unexpected. A lot of excitation is presented here so no matter is it positive or negative it cause certain stress for organism.

If you pull out The Tower as the card of the day maybe you already think about taking radical changes from the base, especially if you have been for longer under stress and pressure. Then The Tower experience and way of thinking could be releasing. You'll know that you are in The Tower way of thinking when you start to perceive things in manner "whatever is happened I have nothing to lose", when you feel at the edge and pumped enough with energy and don't care anymore of losing control. When you feel like you are going to explode is also The Tower state. The lesson of The Tower is: no matter what is going to happen and how awful it could be, even if you lose everything you had and perceived as worthy, you still have your life and opportunity to start from the beginning. And that what is essentially and really worth will survive any shake. So, The Tower puts on test everything that was perceived as worthy. It pulls out on surface that what is really worth and destroys all what is not and illusions we had about it.

Observed as inner process it destroys illusions about own personality, false pride and ego and faces the one with his own essence. It certainly isn't painless and easy but sometimes is simply necessary. When all turmoils are settled down the new state may appear as much better than previous one.