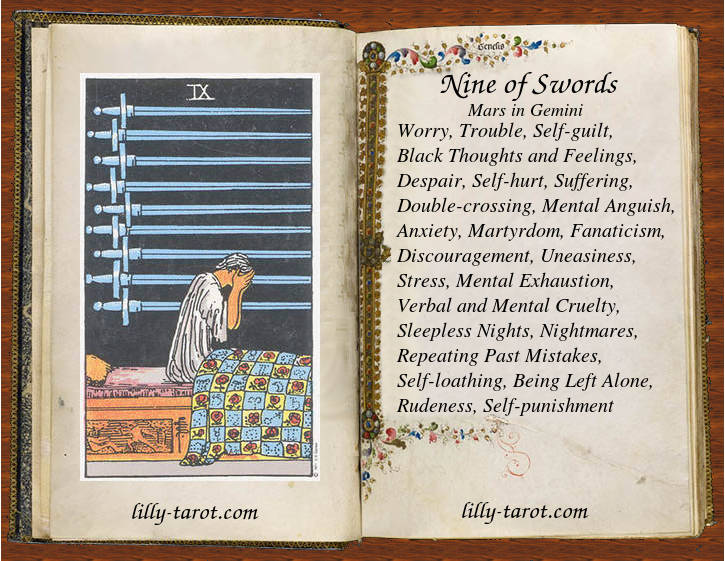 Nine of Swords is a card of heavy thoughts which make great pressure on individual's psyche and mental state. Not rarely, it is the feeling of self-guilty and regrets over past events. It refers to person's tendency to be very cruel and demanding toward himself. Constant analyzing of self and finding out only his own mistakes and missteps leads to self-harm and desperation. The one is feeling stressed and broken, left alone by everyone just with his sorrow and worries.

Very often, Nine of Swords suggests the state of depression and anxiety. If it comes up now and then it is usually temporary states of mental or physical exhaustion that last shortly. But if it comes out regularly in some period it may refer to more serious issues and deeper depression. It may signals deep rooted identity's problems and that one doesn't feel secure in his own skin which often entails isolation and solitude.

Nine of Swords is in co-relation to the second decan of air mutable sign of Gemini. Decan's ruler is Mars, planet of aggression. Gemini is a very mental and verbal sign, cheerful and carefree in his nature, so it comes a bit strange that all three cards related to Gemini are so unfavorable. On the other hand, Mars doesn't fit Gemini because it brings turmoil in their already restless minds. Mars in Gemini refers to hard words, verbal attacks and assaults, cynicism, criticism and hatred. Thoughts are confused and full of cruelty and even morbid ideas and fears.

This card may also represent ideas about revenge due resentment. This is another vicious cycle of recalling to memory all things that once hurt this individual followed by feeling of shame and regret. The person blames himself and feels weak because he thinks he allowed someone to hurt him and he was unable to resist. Hence comes feeling of regret, resentment and anguish. As compensation, he sees the way out trough getting even and pay back for all suffering and pain. Nights are getting sleepless no matter if he recalls memories or if he thinks over the plan for paying back. The more he recalls memories, the more he warms up the lust for revenge. It becomes a motto, paying back to be able to come back into normal life. Due to confusing thoughts and restless mind he is not quite sure about the strategy and how to put his plan into operation. Then it brings even more anxiety, anger and confusion. The most important thing here is to settle down, relax and even for a minute to forget everything as to be able to restore mental clarity and objectiveness.

Appearing of Nine of Swords in readings doesn't refer just to such horrible things. It isn't pleasant card, that's true, but it isn't necessary such extreme. In a daily readings it very often appoint to physical and mental exhaustion if you overwork. Staying up late at night to finish job and do something more is an perfect example of how Nine of Swords may manifest! After that, you're going to bed tired and head full of thoughts and ideas while brain still works quickly and thoughts switch each others swiftly. So many times times I pulled Nine of Swords when slept less than it's needed due to work and duties. "Just to do one more thing and I'm done for today" may take over the whole night.

Another example of Nine of Swords, which is very literal, is having a vivid dream which wakes you up in the middle of the night and you can't fall asleep again. It does not necessarily mean you will have a nightmare or dream of horrors, it just could be a dream as a result of daily activities and overloading with information. This is how the brain functions, it processes daily impressions, informations and issues even if they seem to be quite irrelevant.

Laying in a bed to recover after illness or medical procedure is another literal example of how Nine of Swords may manifest practically. Fear and worries about one's medical health may be present too.

If you pull out Nine of Swords as a card of the day it probably signals that you should think over the question have you overloaded yourself in some way. If you are worried about certain situation, are your worries realistic and based at the real state of things or are they just product of overactive mind and psychical fatigue?

Pay attention to your dreams those days and take a note about them. Your dreams could be worth gold as advisers about what is going on inside you. Dreaming about some daily issues which seemed trivial at the first sight, may reveal you how it really effected you. Once you examine and acknowledge that and accept it just as one of possibilities and information, you will not fall into temptation to take it for granted or as absolute truth. In that way you'll be able to prevent spiral of destructive ideas and thoughts.

Find a time to relax and don't be cruel toward yourself by forcing you to do something unpleasant. If you already have sleep-disorder it is a time to deal with it and put your sleeping habits in the order. It's recommended to take a diary of your activities, how much time each of them takes and how do you feel after doing them. It will reveal you a pattern, which once acknowledged could be switched for the better one.

Have a nice evening and sweet dreams!