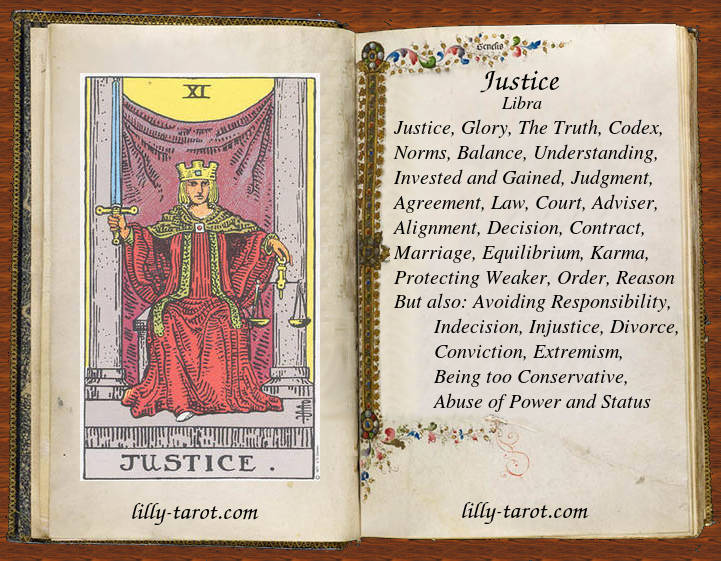 The Justice unequivocally refers to justice in a broader sense of the term. The word justice by itself implies to something positive, but what is just for the doesn't need to be just for another. Very often in the act of justice, one side finds itself damaged. Regardless is it about the legal issues, karma, dispute, it doesn't matter, there are always two sides involved in the game. This is also one of the archetypes which are deeply rooted in humans perception of reality trough duality. In that way, the meaning of Justice is very universal, but at the individual level, everyone has it's own perception of what is right and what is wrong, what is just and unjust. So the justice, even in its positive meaning isn't necessarily positive at the individual level.

As the word about worldly things, Justice usually refers to anything which is related to the legal system. It could be lawsuits, legal issues, marriages or divorces, contracts or alignments which are in order to the constitution. As institutions, there are institutions of law such courts and tribunals and as persons, those are lawyers, advisers, counselors, judges or others representatives of general justice and order. In other meanings Justice represents balance, equilibrium, right decision, feeling for justice, urge to reach the justice, being righteous, responsibility, fairness, truth, partnerships and compromises.

As Major Arcana, Justice very often refers to issues which are beyond the influence of the individual. So the justice could be the cosmic justice and equilibrium or karmic justice. It is a principle of equilibrium between the opposing forces in dualism. As a karmic principle, it refers to what was given will be received back, much as the principle of sowing and harvest. The one could be rewarded or fined for his deeds that could be justly in general but not always pleasant on a personal level.

Justice is related to the sign of Libra - air cardinal sign. Planet Venus rules the Libra and Saturn is exalted there. Libra is the sign of agreement and compromises due to Venus's nature, which could be in some cases contradictory with justice. Justice may suffer because of making compromises or avoiding dispute just to keep peace and balance. Libra is also a sign of partnership and unity and balance between opposites, which is again related to the Venus. On the other hand, Saturn's exaltation in Libra makes this sign a way tougher than it seems at the first sight. Due to Saturn's influence, Libra is just but not always such merciful and forgiving. If we compare opposites such Libra and Aries as signs and Justice and The Emperor as their representatives among the Tarot cards, it leads to the conclusion that Justice - low, order and constitution have limited arbitrariness of might and power of The Emperor. In the other words, no matter how much power someone has on earth he is also subjected to cosmic justice and law of karma.

Pulled out as a daily card Justice may refer that you are at the decision, especially one where your honesty will be at the test. You might be at the choice between two opposite side. What to choose, making a compromise or choose to choose. Do the compromises, agreements and acceptance mean to close your eyes to justice or they may bring more harmony? Is it worth of trying to keep the peace by any means and avoiding the truth? All that pulls with it the certain amount of responsibility. Every decision has to deal with responsibility and awareness of causes and consequences. Finally, causes and consequences are inseparable parts of Justice - Justice is the balance between them, karma is all about that. If we avoid the notions of rewards and punishments, right and wrong, then only remain causes and consequences. This is the world of Justice and Saturn which often seem to be cruel and severe.

As a card of the day, it may infer you are going to make a contract, cooperation in business or any other kind of partnership, or resolving legal issues. It may also signal that you personally are in balance, have clear conscience and sense of justice. And that brings the sense of personal integrity and dignity. If not, Justice warns you to think over the causes and consequences and try to read between the lines connecting them.