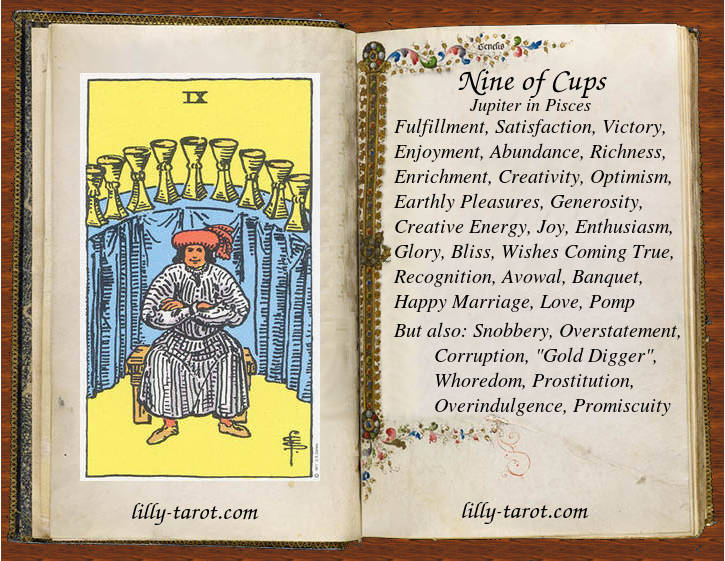 Nine of Cups is the card of luxury celebration, generosity and life on high scale. At the first sight it seems to be followed by certain dose of snobbery, which is not excluded, but also not implied. That kind of snobbery isn't the one followed by selfishness and exclusive behavior. It is rather about generosity, open handed and open hearted followed by urge to take all what the life may offer. Why be ordinary if it could be on grand scale and pompously? Taking and getting all available pleasures which life may offer without hesitation isn't a crime till the other side isn't threatened. This is simply the way of life perceived from the bright and easy side, fulfilled by lust for satisfaction, joy, optimism and high enthusiasm. That even might seem to be naive point of view because it's devoid lust for power and might, lust for ruling by iron fist. Here the ambition is clear, purpose by itself, just for personal inner satisfaction and feeling of glory, not because of submitting everyone. In its uncorrupted form, this card has nothing with abusing everyone in any matter. Though, if its corrupted abusing and mercenary aspect is present.

If you ever have met such person, described by Nine of Cups, and I believe most of us have, you'll know what I'm going to talk about. Those personalities radiate specific charm which comes deep from within their voluptuous nature. And they are real, not pretenders. It is simply in their nature, not forced or stretched. Thus, they seem to be forceful especially when they want to share their enthusiasm and optimism with others around them. Then, they may seem to be so forcing, but actually a lot of passion for indulgence is laying inside of them so they feel they'll explode of so much passion for enjoyment if they don't share it with others. It's sad that they might become depressed or feel rejected if they are misunderstood or not understood. But, they as they are, they will find their fun anyway, with you of without you, thus they won't forget, write off or piss off you if you reject them. Their hearts are big enough for everyone. They are not haters or vengeful persons. You'll be always welcome if you are ready to follow. No, the follow is not appropriate word. It's more about if you are ready to contribute and share the same passions and lusts. This energy is huge, but not the one in Wands manner, we are talking about Nine of Cups. It's watery energy so these persons aren't leaders in the meaning of Wands, which are all packed with assertive will and certain kind of aggression. They don't need followers, they need accomplice in their delicious and inviting "crimes". The water element gifted them by the other kind of energy which is still powerful but yet soft, sweetish, alluring and seducing in finer and more delicate way. Watery characters are so amazingly seducing, very hard to resist them. Their will and power come from domain of pure desires, lust and inspiration, not from lust for power and self-assertive domain what is the case with the Fire element, nor from domain of mind and intellectualisation such in case or Swords or lust for material security which is the case of Pentacles. If earthly personalities need money as primary need and as evidence of security, fire personalities as self-assertive means and material evidence of success, airy personalities as proof that they know and can - based on their mental capacity, the watery ones need it for many kinds of pleasures.

Often those people may be seen as immoderate, immoral or amoral and those features reject most of puritans who assert high and strict moral values. Also many spiritual prudes will also be rejected by these persons, even disgusted or shocked. But in truth, from my experience I have found those Nine-of-Cups people more pure and honest, more spiritual, more generous and openhearted even more exalted and enlightened than many of those false prudes. Sometimes I have an impression that they are at the path from vicious men, voluptuary and libertine at first stage to saints as their final stage. Those who have passed trough all worldly and earthly temptations and had been sunk into them and then choose the path of mystics and saints. The same passion plays the main role here, the same passions and live coals drive them into deepest depths of temptations and vices and into the most exalted and transcendent state. The same passion is to blame for unconditionally commitment to the both extremes.

If you give yourself in a hunt for Nine of Cups representatives I may give you a few directions where you may find them. All types of clubs, cafes, pubs, parties, hotels and places at all, which fit their appetites for high scale, luxury, extraordinariness, exclusivity are potential places for them. They don't need to be expensive but they need to have an aura of never-to-be-forgotten fun. It could be also luxury SPA and beauty centers, Thai massage centers - they like exotics, aroma-therapies too - they like to feed all their senses, ambiental restaurants especially with sea fruits or those oriental which exude the pleasure and comfort. Wine cellar restaurants or liquors promotions may also come into consideration. More extremely form of their fun could be striptease bars, bordellos, kinky clubs, gay clubs and so on, you have already gotten they are prone to perversions and promiscuity. It doesn't mean they would like to take a part into those "filthy" deeds but they just don't want to miss a thing. If the world was one big theater, performances would be of all kinds, and they would choose those which could burst into flame their imagination, burn their eyes and take them into the realm of fantasy world.

The Nine of Cups is related to the second decan of Pisces, ruled by Jupiter. Jupiter is traditional ruler of Pisces, before Neptune had taken this role. Nevertheless, Jupiter is very potent in second decan of Pisces because the double rulership. Such potent Jupiter could be compared with Jupiter in Cancer where is the place of his exaltation. The reason why I am mentioning comparison with exaltation for this case is the reason of overstatement. Jupiter is, by itself, related to overstatement, among the other things, similar as exaltations. Indeed, exalted planet, no matter which is the word about, has something Jupiterian in its expression, and it is the overstatement expression of its own nature. After taking it into consideration, you may only imagine how it looks like having such potent Jupiter, in second decan of Pisces of exalted in Cancer. The overstatement is everywhere in and around the person, especially if this Jupiter is more highlighted as ruler of ascendant, final dispositor or if it makes aspects with personal planets, Asc or ruler of Asc. So, that and Nine of Cups are very close to be understood and recognizable to many of representatives who fulfill those features. Especially with challenging aspects, such squares or oppositions, depending on planet which makes aspect with Jupiter, certain kind of overstatement will take a huge part in persons life. At the end, it isn't so bad. If you are one of those, your life might be full of temptation and self-indulgence but it surely won't be boring unless you decide to make it like that or fall into lethargy, but I bet it won't come that easy. Field of explorations is as wide as the endless ocean of Pisces. So, enjoy your sailing, diving or whatever...

As the card of the day, Nine of Cups fulfills wishes and fantasies, promises satisfaction and enjoyment. This could be your lucky day, even if nothing is really happening you will feel satisfied. And that is important. There isn't needed too much to be happy and exalted. Accordingly to that outer influences don't necessary play the main role in your life, but you do. So if you are able to find joy and happiness inside of you, you'll be able to find it anywhere, vice versa isn't in effect. It may give you a hint or idea how to make your day but it won't make it instead of yourself.

If you are already under huge influence of Jupiter I may recommend you to avoid drugs and alcohol, or at least be moderate. Not because you can't handle it them, but because you don't need them for fun or bursting into flame fantasies. You already have these features incorporated into your being. You may also direct these energies to something highly spiritual and inspiring and experience the bliss and enlightenment of both body and soul, even for a moment. It's worthy of effort.

If you think you lack some of those feature, you may meditate at the card of Nine of Cups to awake or strengthen them. It will surely make you feel satisfied, zestful, openhearted and brings more comfort and sense for luxury.

Happy Valentine's day (or night), which was also significant as the day of feast and wine which really fit my card of the day - Nine of Cups.