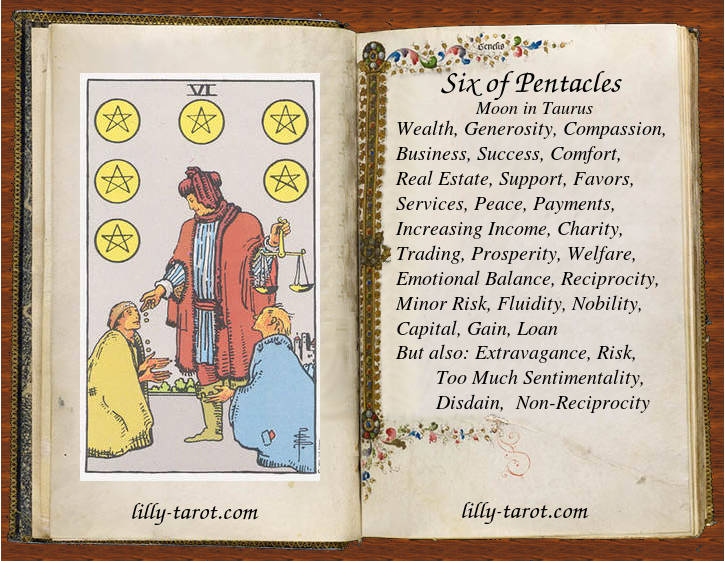 So, Six of Pentacles represents the second decan of sign Taurus. Fixed and earthly character is very present in this combination. Taurus is fixed earth sign, second decan is succedent and by that fixed in its nature. That already explains a lot about this card. Six of Pentacles is the card of stability and well-being grounded at solid base. There is a deep need for security which can not be satisfied only by fulfilling basic and primal needs. Security is here at grander level. It's about wealth, more than average, and everything else which goes hand in hand with this and supports keeping that state. It may include having well payed job, additional income, luxury and comfort, big and comfortable place to live in, safe investments, having multiple jobs supporting and complementing each other and widening possibility for more than one stream of income.

Selling and buying, giving and receiving, investments and gains are all co-related to Six of Pentacles. There is well developed and deep understood sense of flow, fluidity and flexibility. Six of Pentacles points to awareness that there is no massive gain if investment was poor. There is no receiving if previously there wasn't giving. This card, I may freely say, best describes free flow of capital, it's circulation trough wide system as the blood circulates the body. In that matter, Six of Pentacles is designed to represent free and open markets. It also represents charities and various kinds of funds. These are just a few points of view and examples which you can think over to get in touch with Six of Pentacles and understand its wider and deeper meanings.

Understanding flows of capital, investments and gains implies developed awareness of taking certain risks. It may sound strange, because Six of Pentacles is mostly about financial security and well-being, but not every risk is the same. Small and well calculated risk in order to lose less and gain more is a way too far from of taking risk for the sake of just taking risk and hazardry.

On more personal level Six of Pentacles points to sense of generosity and reciprocity. The person is emotionally mature and stable and capable for mutuality. She understands that only trough mutual giving and receiving the feeling of fulfillment is possible. There is no fear of loss if something is given because deep inside understands relation of reciprocity and mutuality. The one is free to give without fear, knowing that everything invested will pay off, in one way another. Of course, sense of calculated risk is present here in plane of emotions as well, so this person will not fall to waste and toss his or her energy and love that easily and desperately just to get a little. It's more likely that instinct and intuition play the role here about who and how much others deserve from them and how is it going to pay off to them. This personality is almost always ready to support the other one, but not always only because he WANTS, but rather because he CAN. And there could be a big difference between "want" and "can". That buys superiority to this personality and she is aware of it, but are others aware of it? I don't think so... This gift is wrapped in generosity and sweetness, and even if it's cheap bauble it will be accepted as award. I have to admit that this ability to do a little just because someone is able to and make others believe that she did a great thing because she wanted it and is an awesome person is great and very useful skill, almost magical! That way, this person buys his popularity, allies, friends, jobs, respect and recognition which all serve her to rich even greater success. Yet, it couldn't be said that this person is tricky and sly, she is just well balanced between investments and gains. At least, she didn't do anything mean. Moreover, she did a good thing! She did what he could do with minimal or average effort (no matter if she truly wished it), and nothing more than that, but that showed up as winning combination - what it really is - everyone is happy at the end of story. And if people are happy they usually don't try to find out hidden motives. Oh, this is really magical, to convince everyone around how she is par excellence do-gooder and even savior while she gives the minimum of effort, just enough to make it visible and of course did nothing that may take her in danger or losses.

Personality fitting Six of Wands is usually famous and respected in his environment, a real little nobleman in his area, and his environment is his little kingdom. He usually has his own business, invests in some kind of charity and, of course, he takes care of having good reputation and that everyone from his little kingdom know for his "noble" deeds. He is also well connected with everyone who could be potential support and give him favoritism. His relations are based on dependence or co-dependence. This type of person is master of making relations of dependence and co-dependence, of course it is not so visible at the surface. He, inch by inch, imposes himself to his environment as important and needed one, the capable one, willing to help and with other similar attributions, in order to convinces others that he is irreplaceable and somehow that they depends on him. At the moment when others start to believe that he really is that, the game of dependence is beginning. They give their power to his local "nobleman" and support his own mission. For their loyalty, they will be "awarded" with piece of his attention, few sweet words of flattering and pandering probably with confirmation how they are trustworthy or whatever they like to hear, or with "cheep" but shining gifts. He is master of how to give less and get more. These people are quite business-oriented types so their sense for business is mirrored in their private lives and relationships and their understanding of basic human behavior and basic human needs are mirrored in their business, which is considered very useful. Knowing that well, they are able to manipulate others using their weak points but in gentle and subtle way. That's why they are good traders. Their rules are simple, selling for higher price and buying for lower. Their sense of timing "what to trade when" is also quite amazing. And trading has very wide meaning here, because everything in life is some kind of trading for them. Their motto could be defined as "do what you are able, when you are able because once you will need support".

As it already said, Six of Pentacles represents second decan of fixed earth sign Taurus. The ruler of Taurus second decan is the Moon, due to Chaldean planetary order. Beside Moon's rulership over the second Taurus decan, the Moon is exalted in this sign. Considering that, the Moon has here high dignity. As one of the light bodies in our astrological system, well dignified Moon gives certain amount of popularity and fame among masses. Considering that, it is nothing strange that Six of Pentacles deals with widely accepted social values, manners of behavior and amenities very present among wide population. Thus, Six of pentacles could be related with populist political systems as well as social-democracy and others based on social protection, social assistance and welfare. Here are various kinds of funds such as social insurance fund, which collect large amounts of money in order to give a help there when security is disturbed. It fits the Moon in Taurus, which is about material security and well being. Both, sign Taurus and planet Moon, are about security and fulfilling basic needs. Taurus deals with very grounded and earthly energies, while the Moon is more related to emotional needs and security in modern astrology. Though, in traditional astrology Moon was related to very materialistic matters and wealth. Having on mind that origins of Tarot date from period far before modern astrology system, I like to take into consideration traditional astrology as well as modern while exploring certain card. So, taking all of that into account, Six of Pentacles is very material and very security and personal well-being oriented card. As both, Taurus and Moon, are related to family and home matters too, Six of Pentacles may refer to depending, co-depending and mutual relations among the family life, while at least one of the family members is in depending position relative to others.

As the card of the day or in daily readings, Six of Pentacles usually refers to giving or receiving, or both. Surrounding cards will better describe what is it exactly about. It may be expressed trough giving or getting present, gift, any kind of support or help or services. It also includes buying or paying for services of given help or support. As daily card, it suggest that it is a good day for any kind of trading or shopping. You may buy your favorite items for lower price than average and it also means making a good trade. Maybe it's now your turn to support someone else who once supported you, or vice-versa. And it is again about trading. Anyway, if you need help, don't hesitate to ask for it because Six of Pentacles points that you have all chances to get it, maybe even more than you expected. On the other hand, it doesn't hurt to think over which trade you make and why, and which are real pros and cons of it. Will current benefit may put you in depending position in the future and what is cost of it? If you are in position to support the other one, think of your motives and make sure you know what you are doing and why. Do you give help because you want or just because you are able? What do you expect from that? Do you want to make the other one your debtor? Is your helping hand there to assert your superiority or to buy you popularity? Is your intention is to form depending relation? Or, on the other hand, are you feeling trapped as debtor and in depending position?

Whatever your motives are, make sure you know them. I am not going to write about morality of motives, it is not about morality, this is the story about trading and calculated risk and investment. So, as much you know and recognize your motives, as much your trade will be successful. And success is the title of Six of Pentacles/Discs in Thoth deck, so it could be considered as one of the key words of this card. Success here is about making two coins of one ;)