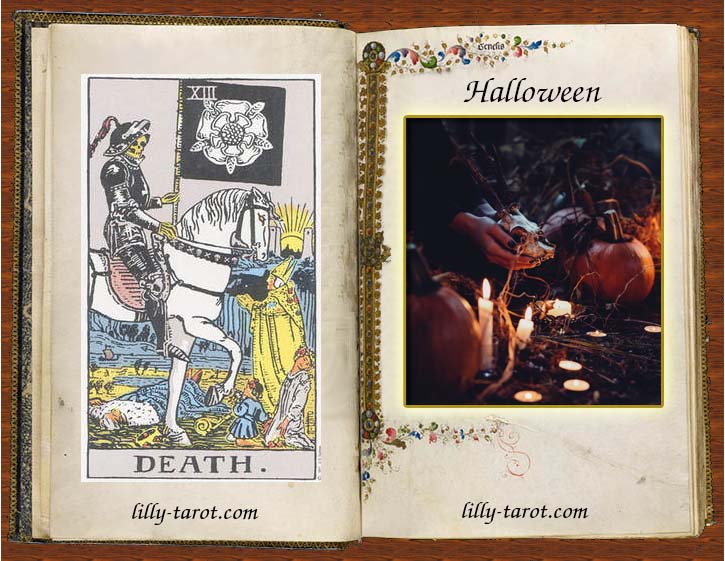 Halloween (All Hallows' Evening), also known as Allhalloween, All Hallows' Eve, or All Saints' Eve, is a celebrated on 31 October evening. The holiday starts at the sunset on Oct 31st and ends at the sunset on Nov 1st. It is usually a great time for partying and having fun, but it could be much more than just a party time. Depending on the spiritual and religious path, one can utilize this time for self-growth and self-development purpose. To me, Halloween is much more than just a date that someone someday in the past said to be a holy day. As astrologer and tarot reader I have my observations on this theme.

What is so special about Halloween?

On the Oct 31st, the Sun is placed at 8th degree of sign Scorpio. Eight degree of any sign has similar energy like the 8th zodiac sign - Scorpio. So the 8th degree of Scorpio emphasizes this energy. Viewing from that angle, it is not strange that the Halloween is the day of the dead and that on this day the veil between the worlds is the thinnest. Those worlds are our world of the living and the world of the dead - underworld.

The other significance is that the Sun is on Via Combusta during the Halloween. Via Combusta (in Latin) or Burning Road or Fiery Path is the mysterious part of zodiac wheel which happens to fall between 15th degree of Libra and 15th degree of Scorpio. It is especially significant if one of the lights - Moon and Sun, or both are placed in that part of the zodiac. Via Combusta is that mysterious that there is quite a little information about it. All we have are just a hints. It is such a shadow part of the zodiac where both lights have their fall and both traditional malefics have their dignities. Fall of the Sun is at the 19th degree of Libra which is opposite of the Sun exaltation at the 19th degree of Aries. Fall of the Moon is the 3rd degree of Scorpio, opposite of the Moon exaltation at the 3rd degree of Taurus. Exaltation of Saturn is at the 21st degree of Libra, while planet Mars, lesser malefic, is the strongest in the first six degrees of Scorpio because Mars is there in its house, triplicity, term and face (decan). The aspect of shadow strongly correlates with the falls of the lights. Not to tell that traditionally planets which correspond with magic and sorcery are exactly Saturn and Mars. Back in time, magic and sorcery were not some fluffy doings for the sake of fun. They were taken seriously with the sense of responsibility and with great respect.

Here are some thoughts about Via Combusta:

Modern astrologers have speculated that the malefic nature of this “burnt” Libra-Scorpio region derives from the presence of malefic fixed stars here in Babylonian antiquity, where the designation “burned path” originated long before the Hellenistic era.

John Frawley: "Why this portion of the zodiac? The idea of the Via Combusta is connected with the ancient purification ritual around menstruation. That it is between 15 Libra and 15 Scorpio rather than anywhere else in the zodiac is because of the relationship of the Moon (the female principle) here to the exaltation of the Sun (the male principle) in the Aries. Ideas that it is determined by ancient placements of fixed stars or the influence of Mars and Saturn over Libra and Scorpio are transparently incorrect"

Another interesting theory is that the Via Combusta actually represent the goddess Ishtar's decent and travel through the underworld after which she was reborn and came back to the land of the living. Some authors view this myth as a pictorial and symbolical display of initiation. Such themes are not rare and were presented in myths of other cultures as well. More about Isthar's decent in the underworld and adopting dark part of self can be found here.

Personally, I don't really believe that Via Combusta gathered the dark reputation because of the fixed stars placed there, but I do believe that ideas based on the fall of the lights, ancient rites of ritual purification, funeral rites and dark ceremonies such conjuration of spirits of the dead, opening the gates of the underworld, necromancy, and very rare and ancient rituals of opening the portals to consort with outer space.

If we take a look at the Tarot deck, cards which correlate with this part of the year and zodiac wheel are Death, Five of Cups and King of Cups. They suggest transformation and purification through the process of letting go. One of the Five of Cups meanings is grieving which fit the story about dead and death, but also any story of loss, disappointment and misfortune. Death and Five of Cups suggest you to let go with no turning back, transform and reinvent yourself, while King of Cups represents an agent of gentle support and guide. King of Cups might be an aspect of yourself which is wise, intuitive and gentle yet active and assertive due that he represents the male aspect of feminine cups suit. It may also be another person whose personality fits these attributes. Clerics, therapists, spiritual teachers, psychics, healers, mediums and such, are all vocations which fit symbolism of King of Cups. At the end, it could simply be an ordinary person at the first sight, but who has an invisible impact on you and is capable to induce your transformation and guide you through it.

Regarding Halloween evening, you may choose to mark your decision and intention for change in a ritual way appropriate for this holiday. In that way, your ratio symbolically seals the deal with your unconsciousness and your intention gets into an operative state. In the same fashion, your ritual or ceremonial work on this night serves as an announcement to the spirit world about your intention. Actually, any ritual work is a kind of contact and communication between this and other realms. But tonight it is specifically related to the spirit world so if you ask for the help of your ancestors or saints or deities, you will probably be heard. If your work includes saints and deities, have on mind to choose them properly. There is no much sense tonight to call upon Zeus or Appolo or Mithra. But it makes sense to chose those related with underworld such Hades, Persephone, Hecate, Osiris, Anubis, Ereshkigal, Nergal or Ishtar (who chose to descend into the underworld) and Isis (who went to the underworld to join Osiris).

Have you ever thought of interviewing ghosts and spirits via Tarot cards? If yes, tonight is the right time for it. It can be any spirit around you who is willing to talk to you through the tarot cards under the candles light, or you can choose to interview one specific spirit. Be careful with this, if you choose spirit to talk to on your own check first if the spirit is willing to announce itself. If it is not the case, don't bother, it is rude. You can ask them about their nature, is there something they expect from you, what is the message they carry for you, is there something you need to know and so... Be creative, use your imagination and don't forget to share the candy!!

Bonus: Simple transformation ritual for getting rid of old and embracing the new

You will need two papers. On first paper write everything that crosses your mind in that moment and what you want to get rid of or leave in the past. It could be events, memories, people, situation or anything related with yourself such habits and unwanted attributes. On the second paper write the opposite of that from the first. Everything you want to let into your life and embrace. Take your time and don't hurry. When finish, put your first paper under the burning candle, read it again, think for a while about things you wrote there. Be thankful for the experiences and insights you have gained and when you feel ready - burn it into a flame! Burn the paper in the burner or ceramic pot which can handle the fire and temperature. Look how the flame is "eating" the paper and your written concerns are not visible anymore. Collect the ashes and when you are done, throw it away in the night and wind. Now you are ready for the second paper. All you need to do with it is reread it and add or change something if you feel so. Place it under the candle and meditate on it for a while. This paper you are not going to burn. Leave it there under the burning candle till it burns out. Next morning collect the paper and place it somewhere safe among other important stuff.