Four of Cups and The Moon - Alcoholic 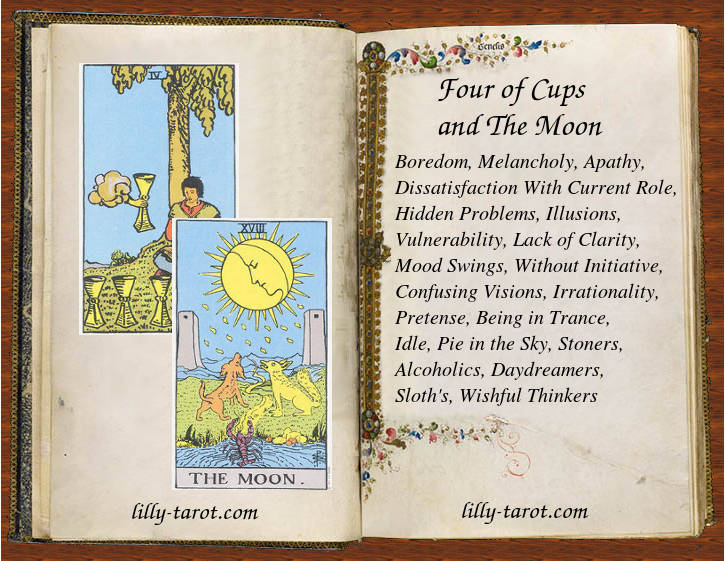 Recently someone asked me how would I read a combination of Four of Cups and The Moon in the spread and does it refer to alcoholic issues? I found this as an interesting topic and decided to write a few words about it. Card combinations impress many of us, both professional tarot readers and newbie's as well as some clients and customers of our services.

I've been thinking for a while about writing about tarot cards combinations, so here we are. Firstly, I want to make an introduction to combinations and reading cards in pairs or triads or in an overall spread. One of the most important things here is to learn to how to look for patterns. Depending on subject or theme you do your reading about, you should try to find appropriate patterns in your spread which fit the main theme of your reading. More cards which fit the certain pattern means more probability.

So, does the combination of Four of Cups and The Moon refer to issues with alcohol? The answer is positive. Does that combination always mean that? - The answer is most certainly no. It mostly depends on your question. If you had in mind exactly, does person A has problems with drinking and get for instance already mentioned combination, it strongly suggests that you are right. But if your question was "Why person A has problems with finding a job?" the answer could also be "Because person A has an unrealistic expectation and also A is lazy. A spends more time waiting for a job to find him instead to move his ass. Person A might also be confused about what does exactly he is looking for, what does he want. And finally, A is not so much up to involve himself. But also, the cause of confusion could be issues with drinking as well as his apathetic depressive state of mind." And so on... there could be many answers and many variations, that's why it's good to stick to the main question, especially if your readings include one, two or three cards. If you do wider spread you may make deeper and wider story, finding causes and consequences.

Let's get back to the same question and imagine wider spread with more cards than just The Moon and Four of Cups. So the question was "Why person A has problems finding a job?". Assume that we got The Moon, Four of Cups, The Devil, Five of Pentacles, Nine of Cups and Seven of Swords among the others cards in ten-cards spread. In this case, we really can come to the conclusion that the reason why person A has problems finding the job is actually the problem with addiction - The Devil and alcoholism - few Cups cards and Five of Pentacles supported with "watery" The Moon card. This person may like to indulge - Nine of Cups, to run away from reality - The Moon, to escape into altered state of mind and daydreaming - Four of Cups, in order to make it easier for himself to avoid responsibility - Seven of Swords, to escape the sense of feeling poor and in struggle - Five of Pentacles and not having control over circumstances and himself - The Devil. The influence of the rest of cards did not mention should be important too, but my intention was to observe the dominant pattern found in this spread.

In future posts, I am going to elaborate farther themes of addictions and patterns which strongly indicates which type of addiction they refer to. Including the answers to "why" and "how" along with side-effects.